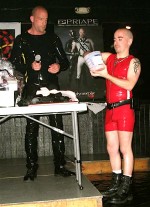 “We are very excited for ths year’s event. It is certainly hard to believe that another year has flown by,” says Pup Nitro, co-producer of the event with his partner Alan Penrod (top photo, r-l), who happens to be Mr. Atlanta Eagle 2009.

“We prepare for this event all year long from promoting, to getting prizes donated,” he adds. “Last year we had approximately 300 people at the contest, and this year we are certainly hoping to increase that.”

Since 2008, Hotlanta Rubber Group has proudly hosted the weekend of vendors, cookouts, socializing and contest categories, as well as several bar nights and “SM 101” courses throughout the year.

To qualify for the Mr. Southeast Rubber title, contestants must be from the Southeast, which the group defines as Florida, South Carolina, North Carolina, Tennessee, Georgia, Alabama or Mississippi. But before they go awarding the sash at the Atlanta Eagle this weekend, there’s plenty of fun in store.

A Friday night meet and greet starts things off and includes the Slick Him Up contestant presentation. Saturday sees activities that include a Vendor Mart and a cookout lunch during the day before the Mr. Southeast Rubber Contest that night.?The contest is followed by the Mr. SE Rubber Victory Party. 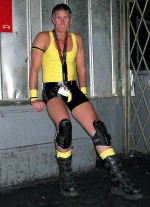 The winner qualifies to compete in Mr. International Rubber in Chicago in November. Nitro won the 2008 Southeast title and says the honor is “an opportunity to represent the local rubber community and also to have fun while doing it.” That goes double for the Chicago contest.

“That weekend taught me lessons that I will carry with me forever, and my brothers that I competed with are still some of my very best friends,” he says. 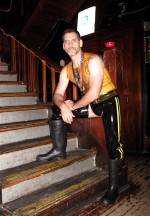 The event is underwritten by the group and its sponsors, so donations collected throughout the weekend will all go to Pets Are Loving Support, which helps critically ill people keep and care for their pets. The Panther Leather/Levi group hosts the Eagle patio on Friday, and 100 percent of bar tips and Jello shooter proceeds go to the beneficiary.

During Saturday’s contest, the Atlanta Sisters–The Order of the Flaming Sugarbakers host an Atlanta Hunks auction for the cause, and raffle tickets for great prizes on both nights also benefit PALS.

“The amount of money that we are able to give to PALS after the end of the event is completely up to the generosity of the participants,” Nitro says. “We certainly hope that everyone is able to support this great cause.”

Hotlanta Rubber is a social organization comprised of people who enjoy the rubber and latex fetish. Their bar nights at the Eagle raise funds for local LGBT charities.

To become a member, you must be 21 years or older and “demonstrate interest or curiosity in rubber, latex, neoprene, gummi, liquid latex, gas masks, waders, etc.,” according to the group’s website.

Get a taste during Southeast Rubber Weekeend. Nitro says everyone is welcome.

“We are looking forward to having everyone out to the Atlanta Eagle for a great weekend of rubbery fun,” he says. “Everyone is welcome at this event. You don’t have to wear rubber to attend the festivities, just need to be looking to have fun.”