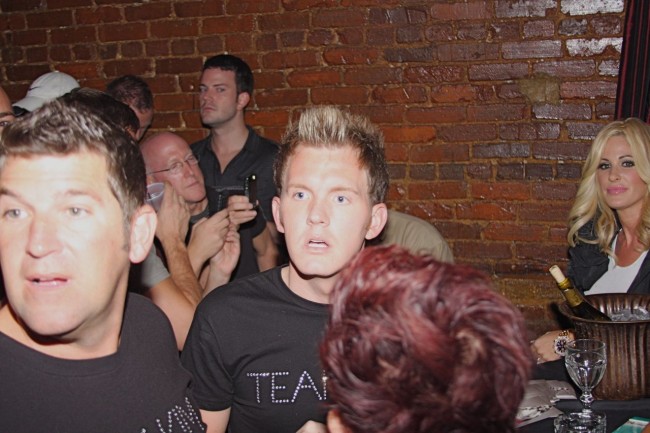 Our love-hate relationship with self-important gay PR flak Jonathan Jaxson is a complicated affair. We hate seeing him craving for attention as he strives for the A-list, but love mocking him at every twist and turn.

His on-again, off-again relationship with Kim Zolciak, she of the well-endowed women on Bravo’s “The Real Housewives of Atlanta,” brought him plenty of attention this year, both from us, the AJC and Q100. He reps her, they squabble, he quits. They sue. They get together. Repeat that cycle at least once, throwing a Zolciak visit to Blake’s in the mix.

Jaxon’s quest for fame attention has earned him a long-list of monikers: “Fame-Seeking Leech” (David magazine) and “World’s worst publicist” (Gawker) are two of our favorites.

And now there’s this one: Jaxson scored the No. 10 spot on Creative Loafing’s countdown of the “11 Least Influential” in Atlanta. We’d argue he deserves a higher ranking, but let’s not quibble.

Jonathan Jaxson has been angling for fame since the tender age of 15. But even after tabloid television appearances, the launch of a celeb blog and stints as a publicist for fellow D-listers, the Atlanta-based PR rep just can’t get to the next level.

We love a sexually explicit video, but really Jonathan?:

Relying on the fame-by-association theory, Jaxson ran the now-defunct celebrity gossip blog JJsDirt.com where he trashed his supposedly Hollywood “It” girl friends. In an attempt to score privileged information from the queen of all media, Perez Hilton, Jaxson sent the blogger sexually explicit videos of himself. In return, Hilton filed a federal defamation suit after Jaxson claimed Hilton asked for those videos.

Oh, and this, which is some new stuff we didn’t know:

His television career didn’t end after “Sally Jesse.” Jaxson, who has recently used the name Jonathan Shelton, had guest roles on the “Ricki Lake Show,” married a man 20 years his senior on a Bravo reality show, and most recently appeared as a celebrity correspondent on CBS 46’s “Better Mornings.”

And the nail in the coffin:

After a decade in Hollywood’s trenches, you’d think Jaxson would give up on fame, but this celebrity-seeker isn’t going anywhere. Jaxson recently moved to Atlanta from Florida, and he hopes to be a big fish in a small celebrity pond. Yet even the most inexperienced at stardom know that cosmetic dentistry isn’t going to get you to the A-list — not even in Atlanta.

Surely, Jaxson will pitch his inclusion on the list as a positive. He did make the Top 10, after all.