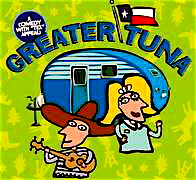 Actor Bryan Mercer is used to bringing different characters to life, but in Theatre in the Square’s new staging of “Greater Tuna,” he transforms himself into 10 roles, including the beloved Vera Carp.

Written by Jaston Williams, Joe Sears and Ed Howard, “Tuna” opens Wednesday as a perennial theater favorite that always seems to pop up locally every few years. Taking place in Tuna, Texas – “the third smallest town” in the state — the show is a breakneck challenge for its actors. Mercer teams with Theatre in the Square regular Bill Murphey in this version, directed by Howard himself.

Like so many gay men, Mercer first saw “Greater Tuna” when the play ran on HBO in 1984, three years after its debut, and then later saw the sequel “Tuna Christmas” at Symphony Hall. The show immediately struck a chord with Mercer, especially since he grew up in the South and could relate to the characters.

Mercer has always wanted to be part of a “Tuna” production. Of all the characters, he says his favorite is the immortal Vera Carp, vice president of the Smut-Snatchers of the New Order.

Mercer’s other characters include both men and women — and an animal. Although he has been in productions where he played multiple characters, nothing compares to this manic pace, with costume changes taking as little as five seconds.

The trick, says the perfomer, is to take each role seriously.

“It’s easy to play it for the laughs, but the secret is playing it real,” Mercer says. “I have seen versions where it’s just bad drag. These days, there isn’t anything automatically funny about a man in a dress.”

Mercer has worked with actor Murphey before and likes their chemistry.

“Bill Murphey is like the Jackie Gleason of Atlanta,” he says. “The man knows funny. I think we are complementary.”

Although there are no real gay characters in “Greater Tuna,” Mercer finds it edgy material for Theatre in the Square with its men in dresses and some pointed social commentary. He also feels that the material resonates among gay men, who almost inevitably inherit a sense of humor.

“Our protection is our sense of humor; so many of us learn how to protect ourselves by developing it,” he says.

Palmer Wells, artistic director of Theatre in the Square, was pleased with the reaction to the company’s holiday staging of “Tuna Christmas” and decided to do the original this summer.

“This is a great show and a wonderful exercise for these two actors,” Wells says.

Mercer and his partner Clint Thornton have been together 14 years now, and they often work together, many times with Mercer acting and Thornton directing. Later this season, Mercer will work with Thornton in Theatre in the Square’s “The 39 Steps,” where he will again play multiple characters.

That show will overlap a bit with the run dates of the returning “Tuna Christmas.” Starring in both, Mercer laughs that there will be periods in which he will do 30 characters a day.