It’s an ‘Avengers’ world. We just live in it. 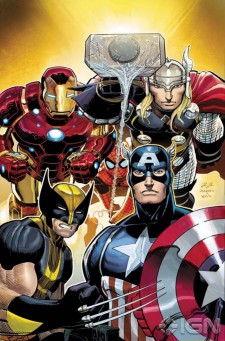 Welcome back, gay geeks! Last time, we briefly discussed the gay supercouple Wiccan and Hulkling–two of the headliners in Marvel’s Young Avengers. In this edition, the Wonder Geeks show Marvel some love–and a tip of the hat–and spotlight the other new Avengers titles.

This is how A-list teams and flagship titles should be handled. Which ones are worth reading? Find out below.

Joining Bendis on Avengers as artist is comics legend John Romita Jr. I’ve been crazy excited about this book—mostly because Spider-Woman has a spot on the team—but I have to say I’m a little disappointed in the first few issues.

The good news: The debut storyline is a lot of fun, Spider-Man gives us a few great one-liners, and long-time Hulk fans will likely gasp at who shows up in this story. Not to mention, this is a kick-ass team: Thor stands next to Wolverine!

The bad news: The art is *fug*! Romita Jr. is a well-respected artist and has drawn some classic stories, but I’m just not feeling his art on Marvel’s gathering of A-listers. It looks like someone gave a three-year-old a box of crayons and said “Here, kid! Draw the Avengers!”

Iron Man also looks like he’s taking a dump on the cover of the first issue (top photo). In this case, it might be OK to judge a book by its cover. Anyway: Fun story. Terrible art. And sadly, that brings the enjoyment of the book way down.

WG Rating: 2 out of 5 pairs of star-spangled panties.

New Avengers has been among Marvel’s best-selling books since it rebooted the entire Avengers franchise back in 2004, so it made no sense to cancel it. Instead, it gets a new first issue and a new team of mostly street-level heroes that are a bit less god-like than the heroes on the classic Avengers team, including Luke Cage and the Thing from Fantastic Four.

This is shaping up to be a fun book with great art by Stuart Immonen, and I’m looking forward to reading more of it. And Ms. Marvel’s on the team (!), which is all I really need to give this book my stamp of approval.

WG Rating: 3.5 out of 5 pairs of star-spangled panties. 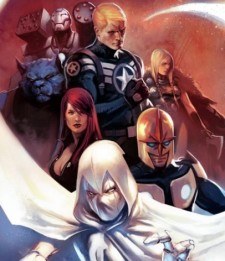 The first story arc just wrapped, and it has plenty of action and surprises along the way, including a trip to Mars, which I find a little out of place. Even so, the first five issues have been great reads, laying the groundwork for mysteries to be revealed down the road.

The art is so kinetic, you almost expect to get punched in the face by one of these boldly drawn Avengers. Written by Ed Brubaker and drawn by Mike Deodato–one of the best artists in the biz–Secret Avengers quickly made its way to the top of my reading list.

WG Rating: 4 out of 5 pairs of star-spangled panties.

Rob’s Take: Since Jay’s kind of the Marvel guy in this dynamic duo, I decided to shut up and let him have the spotlight. Sometimes you just have to let a lady feel special.

I do, however, want to have my say on the Avengers titles as a whole. I typically lean towards DC, but I think the Avengers line is a prime example of why Marvel leads the industry. Sure, they’ve got some random characters (That Moon Knight goon an Avenger? Ugh!)

For the most part, they’ve got their major players highlighted here. That’s how it should be in a publisher’s flagship titles. DC should take note, because I love me some Donna Troy, but she’s not a Justice Leaguer, and excuse me, but just who in the hell is that giant gorilla who talks like an old man?

Also, the Avengers titles form a snapshot of what’s going on in the Marvel U, so casual readers can jump right in while die-hard Marvelites looking for big stories with their heavy-hitters still find a satisfying read.

DC’s come close with Brightest Day, but it really should be a long-running, recognizable title like Justice League, which is currently a badly written throwaway title full of second-stringers and former sidekicks.

Next up: Despite the fact that our rating system is a nod to one of Wonder Woman’s most iconic and dragtastic fashion choices, she doesn’t actually wear star-spangled panties anymore. (We’ll pause while you clutch your pearls and gasp. OK, composed now?) So, next up, we’ll be talking about the new look DC’s foremost heroine is rocking these days and dishing on the good (is there any?), the bad (get out the soapbox, kids!) and the ugly (shoulder pads, I’ll have you!) of the latest “All-New Wonder Woman” (because it went over so well last time).