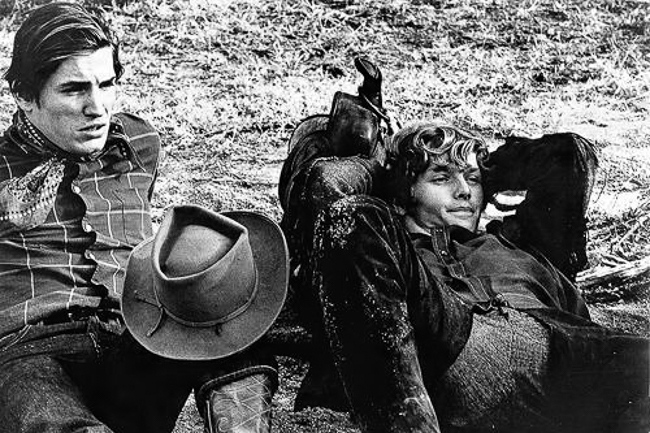 Ansley Mall might be known now for having uber-gay L.A. Fitness and “Bearbucks,” but 50 years ago, it was home to an independent movie theater that kickstarted Atlanta’s modern LGBTQ rights movement.

On Aug. 5, 1969, a month and change after the Stonewall Riots in New York City, the Ansley Mall Mini Cinema was showing Andy Warhol’s scandalous-for-the-time and unapologetically homoerotic Lonesome Cowboys (top photo). Some reports have labeled the film “pornographic,” but it was more of a satire of Hollywood westerns with a gay storyline.

Atlanta lesbian Abby Drue would know. She was in the theater that night.

“It was a cult classic film just like Rocky Horror in a sense,” she told Q. “I hardly would call it pornographic in any sense.”

Drue arrived at the theater with her friends, a straight married couple, and they took their seats. A few minutes into the movie, the lights came on the and movie stopped.

“There was this big sigh in the audience,” Drue said.

They assumed there were just technical issues with the movie.

“The last thing I thought of was a raid,” she said. “Then I turned around, and I saw four policemen in the back.”

“It was just constant harassment in so many ways,” Drue said. “There were a lot of raids in the bars and in Piedmont Park There was this whole purge of wanting to make Atlanta this clean and decent ‘family’ city.”

But more and more LGBTQ people were moving to the city every day. Many of them were fleeing small towns around the South.

“They were coming into Atlanta to try and live a life and be happy,” Drue said.

They were coming to do things like see a Warhol film on a summer Tuesday night.

There was confusion at the Mini-Mall Cinema in the early moments after the lights went up.

“I looked around and someone yelled, ‘What’s going on?’ A guy yelled, ‘It’s a raid!’” Drue said. “I started to laugh because comedy was as rich in our gay community back then as it is now. It’s better to laugh than to cry.”

Police told the crowd to say in their seats. Some people took a chance and made a run for it, but there were more police stationed in the lobby, according to Drue.

“They said, ‘We’re going to call you by rows. Stand up and line up against the wall,’” she recalled. “We saw them talking to people and taking pictures. They did turn some of the men around who were mouthing off and were patting them down.”

“I’m sure there were drugs there. For God sakes it was the ‘60s. I’m sure whoever cleaned the theater after that got a haul,” she added.

Her row was called, and they stood and lined up against the wall. A policeman asked her where her husband was.

“He made me show my license, my ID, where I lived, what I was doing,” she said. “And they took our pictures. And they let us know we might need to be available to come down to a hearing to be a witness.”

The police let Drue and her friends go, but others would leave in a paddy wagon. The charges ranged from drug possession to public indecency, according to an AJC story at the time.

“It was heartbreaking,” Drue said.

The raid provoked LGBTQ Atlanta into action, according to LGBTQ historian Dave Hayward of the group Touching Up Our Roots.

“There was a great outcry about the raid — certainly in the Great Speckled Bird newspaper — and the fears that Atlanta was becoming a haven for censorship and thought control and ‘1984,’ you name it,” he told Q. “I think the raid galvanized all progressives, and especially the LGBTQ community, and led to people standing up and actively fighting for our rights and freedoms.”

Within two months of the raid, Berl Boykin, Bill Smith and others founded the Georgia Gay Liberation Front.

“When I talked to [Boykin] about it, he said the raid was the catalyst for everything that happened here, our own mini-Stonewall that set our forces in motion,” Hayward said.

A small group gathered in Piedmont Park in June 1970 to mark the one-year anniversary of the Stonewall Riots. They handed out pamphlets about LGBTQ rights at the Piedmont Park Arts Festival, according to Hayward.

The following year, it was time for Atlanta’s first Pride march.

“As the first marshal for Atlanta's first Pride march in June 1971, Berl says, ‘There were 125 marchers — I know, I counted them twice,’” Hayward told Q in April following Boykin’s death.

But the city wouldn’t issue a permit for the march, so they had to walk on the sidewalk, according to Drue. And it was a march, not a parade, Drue said.

Atlanta Pride evolved and grew every year from then on out, with hundreds of thousands now attending the annual event. This year’s takes place Oct. 13.

Since then, LGBTQ Georgia has seen and survived the striking down of the state’s sodomy laws, the legalization of same-sex marriage, the ravages and fight against a plague, the election of some 15 openly LGBTQ officials in Georgia, and currently five (the most ever) out members of the state legislature.

But there are no LGBTQ-inclusive civil rights protections in Georgia, and we’re one of four states without a hate crimes law.

Drue, who is the founder and executive director of the Ben Marion Institute for Social Justice, is used to riding that wave over the past 50 years.

“Change is slow,” she said. “Sometimes slower than our hearts can accept. Three steps forward, one step back is how it goes, and it has gone that way. The importance of what came out of that raid was the beginnings of protesting and the beginning of dialog.”

Technology has played a major part in the more modern fight for LGBTQ rights, Drue added.

“Can you imagine if we had Facebook and Twitter then? If we had cell phones at that raid, what would have happened?” she said. “We would have instantly had Ansley Mall covered with gay folks.”

With work remaining to be done, one thing hasn’t changed since that August night at the Ansley Mini-Mall Cinema, Drue said.

“The need to be heard in our community has never changed since the ‘60s,” she said. “We’re not broken, we don’t have to be fixed. We have to be heard and we have to continue to look at how we best can do that.”