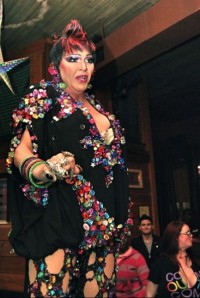 Local gay bars keep the Yule log burning this holiday weekend, and we catch up with Atlanta’s drag bitch legend as she prepares to bring a whole new meaning to “A Charlie Brown Christmas” with a Christmas Day show at Burkhart’s.

Sunday’s cast mixes the veterans of old with popular newer stars for a gift that keeps on giving. In addition to Charlie Brown (photo), look for Ashley Kruiz, Shavonna Brooks, Jasmine Antionette, Maya Ross Monroe and Niesha Dupree to unwrap some holigay magic.

“It’s kind of an all-star cast,” Brown says. “You’d be surprised how many people don’t go home for Christmas or who finish their family obligations early. The bars are usually packed on Christmas Day, and we’re going to make the most of it.”

If you think Brown has been popping up in more local shows lately, you’re right. Most recently, the self-proclaimed Bitch of the South has headlined shows at My Sister’s Room (view photos) and LeBuzz, as well as the Backstreet Reunion Parties at Jungle and the weekly Beauty & the Bitches performances with Heather Daniels and Bubba D. Licious on Wednesdays at Cowtippers.

But if it seems like the Christmas show is part of some Charlie Brown comeback of late, think again, Brown says.

“I’ve been touring through Florida, Tennessee and Texas non-stop, all over” Brown says. “But yeah, I’m settling back in for a minute. It’s the holidays, so I wanted to be closer to home.”

Don’t worry, drag fans. The 62-year-old legend shows no signs of stopping, and there may be even more local Charlie Brown appearances in 2012.

“I will be working in and out of the city as much as possible in the coming year,” the diva adds. “My Sister’s Room and LeBuzz have both said they’ll give me a night each month, and I’m talking to Burkhart’s and Blake’s about doing the same so I can at least have one weekend at home in my own bed.”