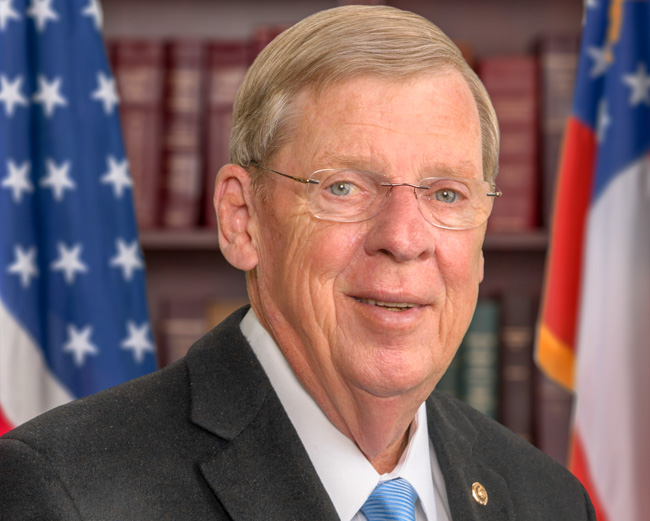 Johnny Isakson will close out a 14-year stint in the U.S. Senate this year having consistently voted against LGBTQ rights during his time in office.

Isakson (photo) announced Wednesday that he will step down at the end of this year due to struggles with Parkinson’s disease. The three-term Republican’s departure sets up a second election in 2020 for the U.S. Senate in Georgia.

While Isakson avoided making incendiary anti-LGBTQ statements while in the Senate, his voting record was clear.

The Human Rights Campaign gave him consistently poor grades for his LGBTQ rights record. HRC gave him a zero for his record on LGBTQ rights in the 115th Congress, which covers January 2017 to January 2019. The group knocked Isakson for voting for anti-LGBTQ billionaire Betsy DeVos as U.S. Secretary of Education and anti-LGBTQ Sen. Jeff Sessions as U.S. attorney general. Isakson also refused to co-sponsor the Equality Act or any LGBTQ nondiscrimination legislation.

Isakson voted against the Employment Non-Discrimination Act in 2013, which passed in the Senate regardless. The bill, which would have provided workplace protections for LGBTQ employees, stalled in the House and has yet to become law.

He co-sponsored the First Amendment Defense Act in 2016, which would offer protections to public employees who oppose marriage equality.

Isakson waffled on whether LGBTQ employees should have workplace protections when a gay Kennesaw State University student asked him about it during a townhall in 2017.

And in 2014, Isakson supported the appointment of anti-LGBTQ judge Michael Boggs to the U.S. District Court for the Northern District of Georgia in 2014. LGBTQ ally President Barack Obama nominated Boggs to the court, but Boggs failed to make it. Then-Gov. Nathan Deal later appointed Boggs to serve on the Georgia Supreme Court.

After Isakson steps down, Gov. Brian Kemp will appoint someone to serve in the post until the special election in November 2020. There will be no primaries, so candidates from all parties will compete against each other, according to the AJC. The election will likely go to a runoff in January 2021 depending on the number of candidates who run.

Georgia's other U.S. Senate seat will also be up for grabs in 2020, with three Democrats vying for the chance to take on Sen. David Perdue. Former Columbus Mayor Teresa Tomlinson, Clarkston Mayor Ted Terry and former lietuenant governor candidate Sarah Riggs Amico have jumped into the race.

Speculation about Kemp’s appointment to Isakson's post and the candidates for the seat in 2020 bubbled up immediately after Isakson’s announcement. The lists have included several with anti-LGBTQ records, including U.S. Reps. Doug Collins and Buddy Carter.

Collins criticized an opponent for supporting civil unions in the 2012 race for the 9th District seat, slammed President Obama’s guidance on transgender access to restrooms during the 2016 race, was a co-sponsor of the First Amendment Defense Act and he denounced the Equality Act, saying that it “nullifies women.” Collins told Fox News that he’s humbled to be considered for the post and that the seat “is something that I would look at.”

Carter supports the First Amendment Defense Act and he is against transgender people serving in the military. He also kicked two transgender people out of a rally in Savannah in which Vice President Mike Pence was stumping for Kemp in 2018.