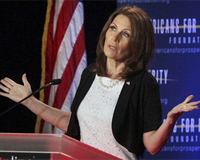 Of the wing nut Republicans slugging it out for the GOP presidential nomination, none deserve a good gay glitter bomb more than Michele Bachmann – even more so than our home state anti-gay faves Herman Cain and Newt Gingrich. But is she a hateful bitch?

That question popped up last week on Atlmalcontent, a fun and often feisty blog penned by gay scribe Christian Boone, a top-notch reporter for the Atlanta Journal-Constitution even if he doesn’t think the paper should cover Pride. He’s snarky — yes, we favor that just a touch – but on July 26, he headlined a post about Bachmann with this: “Michele Bachmann is a hateful bitch.”

The post has to do with Bachmann (photo) ignoring a study that showed that her Congressional district is a hotspot for LGBT teen suicides. Bachmann, not surprisingly, hasn’t commented on it and in the meantime, has worked to quash continued reporting that her husband operates an ex-gay clinic that receives some public funding.

Boone has this to say about the matter:

Bachmann spends a lot of time decrying the country’s moral decay, so she must be aware that bullying has gotten a lot worse than when Vinnie Barabarino threatened to stuff rubber hoses up noses.

No wonder her husband is afraid to come out.

Soon after his post went live, he changed the headline to something a little softer: “Michele Bachmann is an unpleasant woman” and added a note about “trying not to sink to their level.”

The headline switcheroo – and it’s initial harsh tone – raises a question that surfaced for us in coverage of the death of Georgia Rep. Bobby Franklin, an avowed offender of gays and most everyone else that isn’t a middle-aged white guy living in the suburbs. We didn’t call him a bitch or any of the other names that easily come to mind, but we did wonder, “Does Bobby Franklin’s coffin deserve a gay jig?”

Is there a line to be crossed when discussing anti-gay folks? Or should nothing be held back when talking about those that would do the gays harm?