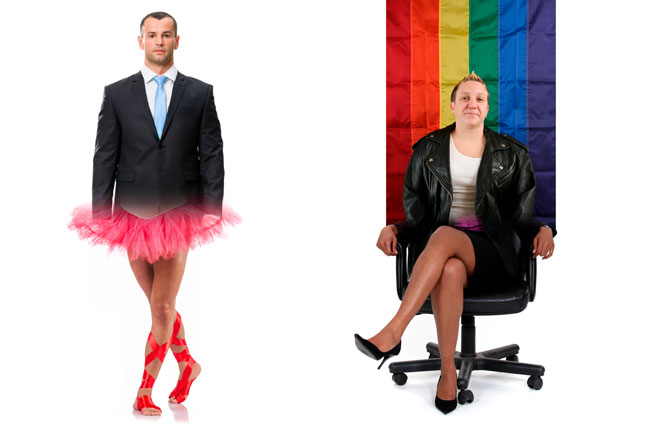 As the equality floodgates continue opening after decades of slow leak, the queer landscape is morphing. Unprecedented steps forward, even among the requisite and expected steps back, are creating new challenges and spurring a debate that has the potential to usher in a New Normal – a great one if we conduct it wisely, and a Next Generation Borg-like assimilation shitshow if we don’t.

If you’ve been around a while, or have your eye on the trajectory of LGBTQ life since Stonewall, reasons to celebrate include, but are not limited to, marriage equality for same-sex couples, widespread public opinion in our favor for adoptions, gender identity and sexual orientation employment protections breaking into Title VII, and the right for gay and trans service members to serve openly in the military.

But are these gains taken by some as automatic passes to join the mainstream and leave queer identity behind?

“I look forward to the day being gay is no more significant than being left-handed,” wrote Evan Urguhart in Outward. “It will not dictate to which cities they move or what cultural products they consume. They will lack that inner sense of their unique vulnerability or unworthiness that you and I still have to deal with.”

Others mourn the loss of queer culture that made being LGBTQ+ special, unique, and most of all, worth saving. Not to mention, they argue, that “straight culture” perpetuates a system that caused the very sexual and gender-based oppression that we worked so hard to overcome.

“In the rush to embrace traditional relationships as defined by heterosexual marriage, the gay community is discarding the very sexuality that the Supreme Court has validated,” writes Patrick Moore in Beyond Shame: Reclaiming Radical Gay Sexuality.

To complicate matters, others of us are left cold to any positive changes by the remaining lack of rights. It’s hard to celebrate progress with issues still on the table like racism against some of us and infecting many of us; health, home and employment inequities within our own community based on gender and race; bigoted state legislators quite specifically out to get us; and rampant individual cases of personal hate and discrimination.

And that’s not to mention the bickering, wrangling and power plays among ourselves.

Good Problems to Have

At first glance, it would seem as if we’re left with two distinct sides of an intimidating fence. Those on one side dive headlong into full assimilation of heteronormative traditions, while those on the other reject those standards whole cloth in efforts to keep queer life, well, queer.

To listen to some arguments, you’re either for equal status within the status quo, or anti-establishment. Period. You get married, buy a house in the suburbs and have babies, or you think that those who do that have lost the very essence of what queer culture has rallied to attain: It’s own identity.

But it’s harder – and ultimately more beneficial – to admit that nobody is on one end or another on any scale. To work toward compromise and acceptance of each other’s preferences lets us enjoy the best of both worlds.

But it’s very American of us not to.

As a country, we love to pick sides. Heroes and villains. Black or white. Love and hate. Good vs. evil. All or nothing. You’re either with us or against us. A Clinton candidacy wasn’t nearly as interesting to vote for without a Trump to vilify and vote against (and sadly for so many voters, vice versa).

And yes: many Americans still salivate over a good Gay vs. Straight rager, though perhaps decreasingly. While “they” say gays would infect straight society with immoral homosexual and transgender cooties that threaten their very way of life, “we” snub their lives in return.

Just the phrase “Us vs. Them” rings through our ears like classic Americana.

The Us vs. Them dynamic rears its head amidst our own, too, of course. Even in tragedy, the community was divided when 49 LGBT and allied partiers were killed by an emotionally conflicted gunman in an Orlando nightclub.

Some celebrated a dramatic shift in public perception that reported the news matter-of-factly, without sensationalizing the “gay angle.” Others were just as disappointed that coverage wasn’t “gay enough” and ignored LGBT issues in the case. By the way, both were right, but we acted like one couldn’t exist without the other.

Even in ways that we came together, some wanted to choose up sides and fight it out. It’s a conundrum that plays out in other tragedies and other discussions of LGBTQ issues. In our anger and sadness – yep, it was both, and no one had to choose – some of us missed an opportunity to see both sides and meet in the middle

Ultimately, it’s a great problem to have when you’re battling for how you want your inclusion represented. In the past, we had to rail against what was once the norm in news coverage involving gay people: Ignoring LGBT victims and victims of color, while over-noticing the plights and tragedies of straight white people.

These challenges leave room to grow. But the question remains: Does acceptance mean blind assimilation? Do we have to lose what's great about queer life to have it all? Maybe it’s neither and both. Sometimes we have to leave things behind so that we can move forward. And sometimes we don’t – we can embrace the past while forging ahead into the future with the past in our back pocket.

Gay infighting knows no bounds. Ask a dinner table of queer friends for their views on drag, open relationships, racism within the community, transgender inclusion, bottom shaming, having children, femmes vs. butch, the letters of LGBTQ+, non-profit spending, public displays of affection, or hell, even mixing prints.

We don’t have to choose sides. The emerging Renaissance Queer can have it all. And that goes double when it comes to queer identity and civil rights.

Of course it’s not just marriage. Move to a better school district, or alternately vow to stay in town forever. Catch a circuit DJ at Heretic and an EDM favorite at Terminal West. Read queer media as well as mainstream newspapers, respected business journals and silly listicle blogs. Network with the Atlanta Gay & Lesbian Chamber of Commerce, and have lunch with professionals in your local trade organization. Join the gay softball league and your alumni association's football boosters.

We can have the best of both the queer world and the world at large. Having the same choices as everyone else is good, and making them your own is even better.

Queer culture was founded on a fight for variance and diversity, a battle for justice, and the right to be whatever and however we choose in or out of conventional parameters. That doesn’t have to change just because some of us also want an SUV, one partner, and a white picket fence and others of us want to walk everywhere and fuck everyone.

Let clones be clones. Let radfemmes be rad. Grant each other the equality we supposedly each want to be and to love as we see fit, and it’s a safe bet that our very queerness can and will persist.

It will be there as we fight for what remains unsettled, even if equality continues at a rapid pace. And like everything else in the universe, queer identity will likely morph to suit new needs. Maybe mainstream and queer cultures can even change each other for the better.

Being LGBTQ doesn’t have to stop meaning being unique or fabulous or radical. Rather than doing old things in old ways, we can keep doing everything in new ways, all ways, as determined by each one of us and our personal set of priorities.

Keep your queer identity and your demands for social justice, as well as the trappings and perks of equality. Have it all. Nothing is stopping you. All options are on the table. That’s a good thing.

Mike Fleming is editor and co-publisher of Q Magazine and Project Q Atlanta. This article originally appeared in Q's print edition. Pick it up around town, and read the full issue below: