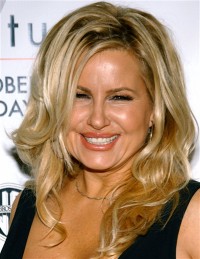 With shows in town this Thursday through Sunday, actress and comedian Jennifer Coolidge is working her hilarity and showing her love for Atlanta. We jumped at the chance to chat.

After 20 years in Hollywood and multiple iconic parts under her famously ample bosom, Coolidge (photo) became a gay favorite in roles like the “bend-N-snap” friend in “Legally Blonde,” the plastic surgery addict on “Nip/Tuck,” as Stifler’s mom in “American Pie,” an eerily accurate portrayal of ’70s actress Karen Black, and the dingy, gold-digging lesbian in “Best In Show.”

She’s also famous for one-liners in those roles, including “It makes me want a hot dog real bad” from “Legally Blonde 2.”

Coolidge graciously credits the writers for her oft-repeated lines, but we say it’s as much about her delivery when it comes to making them so memorable.

As a character actress, she says that the biggest misconception about her is that she isn’t dingy and she doesn’t look the same in person.

“I think what happens is that once you see me in a certain movie, people just believe I am that person,” she says. “I don’t look like I do in the movies. I play these crazy parts with cray makeup, and people tell me, ‘you look so much more normal in person.’”

While actors never age out of character acting and Coolidge can expect a long career, one drawback to doing her job so well is that even Hollywood wants to typecast her.

“If you play a gold digger, or the loser best friend, those are the scripts that show up at your door,” she says. “Right after ‘Best in Show,’ all I got were scripts to play the big-lipped plastic surgery lady. They think ‘Oh, that’s what you do, and you should do it a hundred more times.’”

Hollywood’s current state of affairs is on Coolidge’s mind a lot, and it’s part of her comedy act at Laughing Skull Lounge, she says.

“I have sort of this disenchantment with Hollywood right now,” she says. “There’s all these terrible reality shows. These girls just have to giggle and fart, and they call it entertainment. The town is going through a depressing time. The bar has just gotten so low.”

At the two-shows-a-night Thursday through Sunday (the Saturday shows are already sold out), you can also expect some behind-the-scenes stories from Coolidge’s biggest hit movies, but don’t expect excerpts from them or for her to recreate those characters.

“Standup is just dirtier, a far more risqué kind of thing” Coolidge says. “It’s definitely R-rated, and the gay guys are always cool with that… I talk about the strange stuff guys say when they’re trying to get you to sleep with them, I talk about sex, being single again, really weird Hollywood auditions. I think people will be really interested in it and laugh.”

And if she’s down on L.A., Coolidge is charmed by Atlanta.

“I performed at Laughing Skull about 10 months ago, and I really wanted to come back because it was one of the best experiences I’ve had on the road,” she says. “It’s the most fun town I’ve been to. Other cities are like, ‘What the hell am I going to do?’, but Atlanta is so alive. It’s a great way of life; it feels like the people want to live here, and that’s inspiring.”

She stopped at Outwrite Thursday to pick up Chelsea Handler’s new book.

“I love her other books, and I really wanted to get this one,” she says. “I’m just sorry I’m going to miss her by a week.”

Handler plays the Fox on March 28 with a big gay pre-party at the Livingston. Ms. Chelsea also signs copies of her latest book at Outwrite earlier that day.

So besides reading Handler’s book, what’s next for Coolidge?

“The standup thing has been really fun, really seeing the United States instead of reading about it,” she says. “The good thing is that I don’t have the pressure because of my regular gig on ‘The Secret Life of American Teenagers,’ so I can pick cities I want to play like Atlanta and choose my gigs. I don’t have to go to every little town on the comedy circuit.”

Also look for another “American Pie” installment with the original cast. Coolidge is looking forward to the filming this summer.

“I’ve done six or seven movies with Eugene Levy, and it’s always really fun, and those boys are so great,” she says. “We all met when nothing had really happened for any of us yet. It was the beginning for us, so now it’s really fun and it’s pretty down to earth and a really charming group.”

Anything else Coolidge wants people to know? Just one thing:

“I am always interested in the best espresso in town. Anybody who can point me in the right direction I will love forever.”

Jennifer Coolidge plays two shows each night at the Laughing Skull Comedy Lounge behind the Vortex on Peachtree Thursday, Friday, Saturday and Sunday. Buy tickets online or by calling 877-LAFF.AT.U.