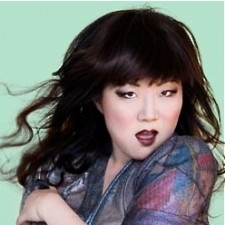 Everyone’s favorite funny lady and fag hag Margaret Cho is back in town Saturday at the Ferst Center on a last leg—and encore—of her popular “Cho Dependent” tour, and we are giving away two pairs of tickets.

To whet your appetite to buy tickets or enter our ticket-giveaway (info at the end of this post), enjoy our sit-down with Cho in which she talks about everything under the queer sun.

The comic, who now makes her second home in Atlanta, brought the concert to the Tabernacle in December with her notorious quips, but with music as well from the “Cho Dependent” album.

“It’s been fun to incorporate music,” Cho says. “Most of it is stand-up, but it’s nice to do something a little different.”

In the show, Cho gets plenty of digs in at Bristol Palin, one of her fellow “Dancing With the Stars” contestants, including a priceless impression of what Bristol looks like dancing. Another skit talks about what “Dancing With the Stars” producers do to keep their contestants from going hoarse. Cho also sings the ditty “Your Dick,” which she performed with the Atlanta Gay Men’s Chorus in December.

The album was recently nominated for a Grammy, and Cho was excited about going to the awards. This was her second nomination in the Best Comedy Album category. Her competition this year included Kathy Griffin and Robin Williams, but they all lost to Lewis Black’s “Stark Raving Black.”

“Most of us are all friends,” she says. “It’s cool to know the other nominees; I admire them all.”

Some people have been surprised she has such a nice singing voice, but Cho says she took her time in making the album and getting ready to croon.

“I had to work very hard at it,” she says. “I made sure I trained and trained. I learned so much from the people I worked with. It’s a testament to them when people like it.”

Cho will be back filming the third season of “Drop Dead Diva” in Atlanta this spring and summer. On Lifetime’s series, she stars as paralegal assistant Teri Lee. During the months she is filming, she gets to spend a lot of time in the city.

“There is a lot of downtime while making the show. The cast and I are foodies,” she says of eating out in Atlanta.

One of her favorite restaurants is Holeman & Finch, where she loves the hamburgers. She also hangs out at Laughing Skull Lounge, where much of the material for the new tour began.

Cho is a big fan of the local LGBT scene and supporters, who of course eat her up.

“It’s very progressive and political,” she says. “There is a lot of art and culture, great things to do, events. I think Atlanta has a sense of re-invigoration. It attracts the queer community from all over the Southeast. I am excited to be part of it.”

On “Dancing With the Stars” last fall, she was paired with gay dancer Louis Van Amstel. They were eliminated in week three, ironically, after Cho dedicated her dance to teen victims of bullying. The experience as a whole was a great one, but she admits it was very physical—and filled with pressure.

“More people saw those two minutes of dancing than have ever seen my shows or concerts,” she says. It was also frustrating to deal with “the weirdness of the Palins,” she says. “A lot was unfair, but that is what people wanna see.”

She and Bristol Palin traded barbs after the show’s fall run. Cho suggested that Palin only participated to help her mother’s popularity, while Bristol said that if Cho understood her family politics better, “she’d embrace us faster than KD Lang at an Indigo Girls concert.” Notoriously, sister Willow Palin also called someone a “faggot” on Facebook.

“I do believe the Palins are homophobic,” Cho says. “I did not realize that. It’s painful to realize that someone you know and like is homophobic.”

Cho believes that we are at an ironic time in the LGBT movement.

“On one hand, we have the repeal of ‘Don’t Ask, Don’t Tell,’ and shows such as ‘Glee’ on TV,” she says. “We have small triumphs, yet homophobia is taken so casually. The way people take it lightly is not acceptable. Homophobia is everywhere and we need to uncover it. I think that gay rights need to be more aligned with civil rights but people in the civil rights movement don’t want to be aligned with gay rights.”

All you have to do is sign up for our weekly e-newsletter here and confirm your subscription by replying to the e-mail you receive.

That’s it. And don’t worry. It’s free, we don’t spam people, and we never share your e-mail address with anyone.

From the new subscribers, two lucky winners will be chosen at random to receive a pair of tickets. The only rules of engagement are that we will close the contest on Friday, Feb. 18 at noon and notify the winners with ticket details at the e-mail addresses they provide. Winners will have six hours to accept the tickets, or we will select someone who’s quicker on the draw.