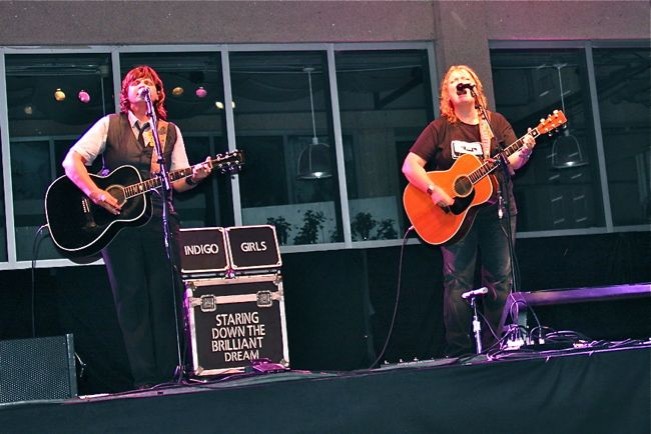 We’ll go out on a limb and say that nothing draws as many local women who love women out of the woodwork quite like an Indigo Girls concert. Two sold-out shows over the weekend proved the theory yet again.

The siren’s song of the venerable homegrown harmonizers worked its magnetism on hundreds upon hundreds of eager lesbian fans – plus a handful of gay men and even fewer straight people with season passes – who couldn’t resist the pitch-perfect call to Atlanta Botanical Garden on Friday and Saturday.

Armed with those legendary voices, a set list covering more than two decades, and their ever-ready guitars, Amy Ray and Emily Saliers (top photo, l-r) – backed only by an electric-violin accompanist – did what few, if any, other acts or events can muster: gettting more female couples, two-mommy families, longtime friends, and heyday partiers to drop whatever they were doing and come together in one place.

Everyone was there to see the hometown stop on the concert tour honoring the Girls’ 2010 live album “Staring Down the Brilliant Dream,” a deluxe two-disc box set compiled at concerts from 2006 – 2009, featuring 31 classic songs that basically cover their entire discography plus some cover songs and new arrangements.

As our huge gallery of photos from Saturday’s concert testify, the Botanical Garden lawn was packed and buzzing well before twilight as lesbians toting blankets, cocktails and beers descended down Piedmont and through the park like faithful followers to musical Mecca.

Opening act the Shadowboxers set the pace, and the euphoric mood only grew as night fell and the venerable duo took the stage.