As Out on Film continues this week, Atlanta’s LGBTQ film festival shines a spotlight on the importance of matter-of-fact representation in cinema and other aspects of queer life.

“I think we’re just now getting to the point where you can have positive film portrayals of LGBT people who just lead normal lives,” said Jim Farmer, festival director of Out on Film. “You know, their sexuality is not the entire crux of the film.”

Even with progress beyond queer films of the past where queer characters always died or killed someone, there’s work to be done, Farmer added.

The episode also included Eammon Ashton-Atkinson, the journalist, filmmaker and amateur rugby player behind “Steelers: The World’s First Gay Rugby Club.” Our Top 20 Best of the Fest recommendations include the documentary about London’s gay rugby squad the Kings Cross Steelers. 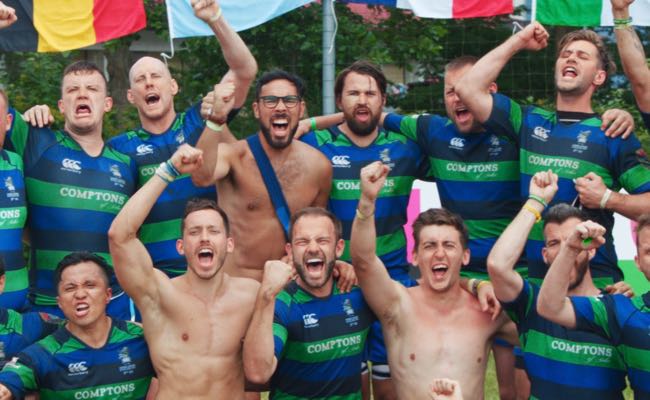 Ashton-Atkinson echoed Farmer’s comments about representation in film, and he applied them to LGBTQ inclusion in sports.

“When I joined the club, it was the first time that I was given a chance to play in a sport where I could really be comfortable just being myself and know that I wasn’t going to be teased or bullied, or that people think differently of me for being gay,” Ashton-Atkinson said. “It was this incredible feeling.”

“So one of the points of the film is to show that we, just as much as anyone else, are entitled to our place on the court or the pitch,” he added.

Through the personal stories of team members — including a lesbian coach in a man’s world, a gay athlete who battled serious depression over coming out, and a drag queen who kicks ass on the pitch, “Steelers” (second photo) also tackles masculinity, homophobia, misogyny and mental health.

Elderly patients should take Xanax in the initial dosage of 0.25 mg 3 times per day for the treatment of any conditions (while the maximum dose for them shouldn’t exceed 0.5 mg 3 times per day). The maximum daily dose of Xanax for adults is 10 mg. The course of treatment with Xanax (Alprazolam) at https://www.pharmacybc.com/xanax-alprazolam/ can be long or short. Short treatment courses last several days. They are used to relieve acute and sudden fear (for example, after some horrible event, etc.).

“You can see with Simon, he talks very openly about his mental health struggles, and he’s this really handsome guy who is good at the sport and seems like he’s got everything going for him, but he has this spiraling depression,” Ashton-Atkinson said.

“The reason people are connecting with it is that intimacy and honesty,” he added.

You can watch the interview with Farmer and Ashton-Atkinson below and here, listen below and on Podcast Q via your favorite podcast app.

Out on Film worked hard to meet its commitment to diversity throughout the festival – even through a global pandemic, Farmer said.

A mini virtual festival in June for Stonewall month was both a test of and a testament to what Out on Film could accomplish in an online format.

“We spent the spring and summer transferring to online pretty much the same format — 11 days, movies every day, filmmaker Q and As, special events,” Farmer said.

The process was a chore, but Farmer and his volunteer board are as proud of it as ever, he said. The organization has Oscar-nominating privileges for the first time this year, and it received a hefty batch of arts grants to ease some of the burden creating the festival.

Out on Film’s sense of community isn’t lost with the virtual event, and there are actually pluses to screening the festival online, Farmer said. That includes reaching LGBTQ people who may work odd hours and can’t usually attend, as well as people from places beyond Atlanta who might not otherwise access a queer film festival.

“I like to think that Out on Film is a safe haven for people to come join us for 11 days, be who you are, see yourself on screen — or on your computer for this iteration — and just to have a sort of community, kindred spirit with everyone else who’s participating,” he added.

Out on Film streams online through Oct. 4. Find more at outonfilm.com and steelersthemovie.com.