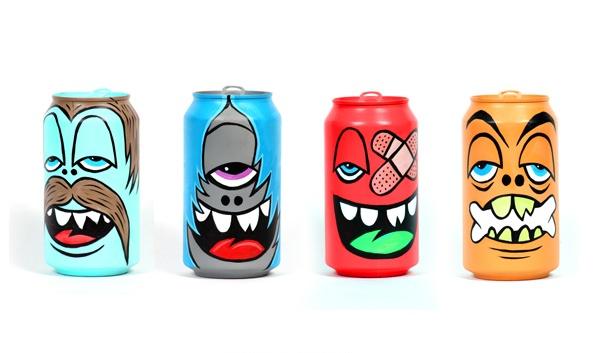 Leave it to Kai Lin Art Gallery, the gay-owned contemporary art space that draws the cool boys, to feature exhibits like “Popstars & Cokeheads,” including works as catchy in execution as the show’s name. 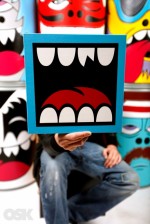 More than 100 soda cans (top photo) painted with a playfully sinister cast of characters are the brain children of artist and graphic designer Greg Mike (second photo, with his “Loudmouth” logo).

It’s a fun, full army of—literally—“Pop” stars and “Coke” heads, and the artist, with an undeniable sense of humor, is their perfect leader.

In an interview with Focus magazine, the New Yorker says that his formative years still influence his art today.

“As a youngster, I remember being glued to the TV watching the classic cartoons. The bright colors and animation of those Disney toons were such an inspiration to me.

My desire to emulate those characters is what led me to pick up a pencil and brush for the very first time.”

The exhibit, which starts with Friday’s opening party and runs through March 6, also includes more than 30 other original hand-painted works, sculptures, t-shirts and a visual installation. Prepare to have your senses dazzled.

This Kai Lin exhibit follows “Wonderland,” a group show featuring more than a dozen established and mid-career artists with ties to the Savannah College of Art and Design-Atlanta. That opened Dec. 4 with a full crowd.

Here’s a video with Greg Mike in his studio working on and talking about “Popstars”:


A Word with GREG.MIKE from Oh Snap Kid on Vimeo.