It’s bad enough that the Advocate’s annual Gayest Cities in America list doesn’t even try to be semi-scientific. It’s worse that, as Atlanta drops in the rankings again this year, the magazine gets its facts so wrong. Two years after being named the No. 1 Gayest City in America for 2010, Atlanta (top photo) ranks No. 9 this time around. Last year, we fell to No. 7 with even weirder science than the previous year with no reflection of reality. For 2012, the criteria are dumber than ever, and the Advocate hits a new low in omissions and inaccuracies. We get that they’re trying to be funny, but apparently no one told them that smart is funny and stupid is, well, just stupid. 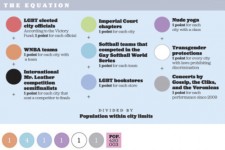 The categories good for one point each this year (bottom photo, click for larger view): LGBT elected city officials, WNBA teams, International Mr. Leather semi-finalists, Imperial Court chapters, Softball teams in the Gay Softball World series, LGBT bookstores, Nude yoga and concerts by the Gossip, the Cliks and the Veronicas. Totally stupid, right? More stupid: Atlanta gets no credit for openly gay city council member Alex Wan, much less the 10 or 12 city-level elected officials in the metro area. We also get one point for an LGBT bookstore, ignoring the fact that we have two. Sorry, Outwrite and Charis; guess your financial woes earn you each a half point. It gets worse. Here’s the write-up on our fair city:

We won’t fault you for trying to forget Real Housewife Kim Zolciak’s dip into the lesbian pool — but don’t blame Atlanta if everyone there wants to sample the fun LGBTs have all over town. Lesbian businesses thrive in East Atlanta, and gay clubs go off in Mechanicsville. People coming to Atlanta like to party, and the GayTL delivers with Black Gay Pride in September and Atlanta Pride in October, and the black gay clubs’ second-busiest weekend of the year surrounds the observance of Martin Luther King Jr.’s birthday in January. Holla!

Let’s break it down: • Let's do just forget the patently offensive Kim Zolciak reference. If they’re only going to devote three sentences to Atlanta, don’t waste the second longest one on the “Housewives.” • With My Sister’s Room as the most obvious, lesbian businesses do thrive in East Atlanta. So do gay-owned businesses like Mary’s and Trader’s. Why paint East Atlanta as a lesbian enclave and not mention, say, Decatur? • Do “gay clubs go off” in Mechanicsville? The neighborhood near Turner Field does have Legends, the special event space in an old church that has hosted many a gay party, but what other “clubs” are there? Let us know if you can name one. Even if we ignore Midtown, which we shouldn’t, we think visitors would rather know about gay clubs in DeKalb, Marietta and East Atlanta before we set their GPS’s to Mechanicsville. • We are proud of the huge turnouts for Atlanta Pride, Black Gay Pride and MLK Weekend, but we might be prouder of two thriving gay business groups, multiple gay sports leagues, the fights of Georgia Equality and the Queer Justice League, multiple LGBT media outlets, and far and away most importantly, the diverse makeup of our community. There is truly something in Atlanta for every L, G, B and T. To add insult to injury, Knoxville is gayer than Atlanta at No. 8. So is Salt Lake City, which ranks No. 1 – yes, Utah is home to the Gayest City in America for 2012. Minneapolis, which came in first last year, falls to No. 7. The Advocate tries to explain its idea for the list: "It’s no secret that megalopolises New York City, Chicago, and Los Angeles have robust LGBT life — and we’ve even heard tell of little queer hoods like the Castro and P-Town. This isn’t that list." No shit.