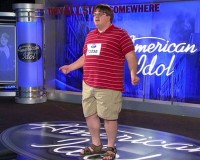 We’re tuned into this week’s “’American Idol two-hour event” in our ongoing mission to seek out new freaks, hold out for the real contest, and boldly go where every “Idol” open audition has gone before.

Actually, where they haven’t been before is Milwaukee, our third stop on Season 10’s kill-us-now U.S. tour of joke auditions, a few strong contenders, Steven Tyler freakdom, JLo flash with no personality, and Randy just hanging onto the best gig he’s ever had. As last week’s two-hour Wednesday in New Jersey and one-hour Thursday in New Orleans taught us, there is no reason to make this shit last two hours. They fill the time with extra Miss Seacrest voiceovers about nothing, montages of the worst auditions, back stories about hopefuls—many of which you’ll never see again—and cheesy local trivia about the city they’re visiting.

Speaking of cheesy locals: “We don’t have an accent here. We just like our cheese and beer,” rhymes a lady in the throngs gathered before the auditions. This makes us look forward to the next two hours even more. Season 8 finalist Danny Gokie is here because he’s from here, and lord knows he’s not doing anything else. Randy and JLo argue over whether the view is of the ocean or a lake. Let’s see… Milwaukee’s in Wisconsin, right? Let’s go with lake, a Great Lake even. Tyler is oblivious to this; he’s busy doing that scream-sing yowl thing at the camera for no apparent reason.

Scotty McCreary came in for the audition from small-town North Carolina. He’s a high-school baseball player and country singer with a great smile. His baritone version of Josh Turner’s “Your Man” is good, but if he makes it further than Hollywood Week, Scotty’s gonna have a helluva time on Beatles Night.

Local Milwaukee TV news covers “Idol’s” presence ad infinitum. Since we have two hours, let’s watch some of that, or you know, fast-forward it on the DVR. Let’s also mention three times in two minutes that it’s cold in Milwaukee, even in October when this episode was filmed. Yawn. Then Miss Seacrest spends what seems like eons on Joe Repka (top photo), who is studying to be a radio broadcaster. The guy better study hard, because he won’t be on the radio as a recording artist. Steven Tyler howls like a wolf and mouths “Wow” to the camera. Roll a string of other embarrassingly bad audition clips. If you’re an audience member who lives for these fools, have fun. If not, fast-forward is that right-arrow button on your remote. 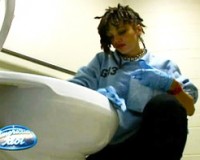 The entrance of 15-year-old Emma Henry makes pervy granddad Tyler light up. Sadly, her version of “True Colors” doesn’t light up anything. JLo: No. Randy: No. Steven: well, yes. Sorry, Emma. Don’t cry. OK, go ahead if you must. Oh shit. Randy changes his vote, and we’re going to see her in Hollywood. Dumbasses. Rather than the “emotions run high” sequence on the actual show, let’s stop to remember that 30 minutes into this circus, we have seen one good country singer who will never become the next “Idol,” a long line of crappy clips and one poor child who warbles like a jackal but gets sent through anyway. The two-hour event is tortuous. The producers sense our frustration, because we like to imagine they can hear our wails over those of the contestants. Four horrible singers who think they’re worthy do Lady Gaga numbers. Apparently, the producers can’t hear us after all. Driving the point home, let’s do a segment on SummerFest, Milwaukee’s giant music festival.

Wait. It’s going somewhere. Naima Adedapo (second photo) cleans the toilets at SummerFest wishing she were on stage. The single mom with the colorful look gives us the first sob story and the first really good—excellent even—audition of the night. We’re so glad, because it took 35 minutes to get here. “Great,” “Steamy,” “100 percent yes.” We agree. Spoiler: Word has it she does well in Hollywood. Miss Seacrest sends us to yet another commercial break with a promise that we “will not believe the talent in Milwaukee.” What he doesn’t say is that the talents are for doing the Worm, balancing a five-foot toothbrush on a palm, line dancing, and the Limbo. The hopefuls in the holding room are bored. So, sweet mother of god, are we. 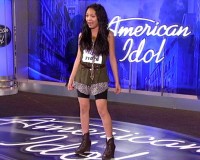 Good thing one kid can do flip flops down the length of the room—and do a roundoff squarely into a cameraman on the floor. Did the channel accidentally change to “America’s Funniest Home Videos”? No, still with “Idol.” Minute 41 and counting. If this was Thursday’s hour-long format, we’d be almost done. No such luck. Time for an extended clipfest of people who showed up to act a fool on TV. Finally, Bar mitzvah and wedding singer Jerome Bell can belt, but he can’t control his voice. After the crapfest we’ve been subjected to so far, he goes to Hollywood. Randy, showing that his sensibilities are thrown too, actually says, “Hot crazy vocals, in tune, controlled, dynamic.” We rewind. Nope, we were right the first time.

You may have noticed that we’ve mentioned several 15-year-old hopefuls auditioning this year. “Idol” diehards know that’s a change in the age requirement. “Idol” producers go into it here. Did we mention they have two hours to kill? At least this segment is by way of introduction to Thia Megia (third photo). She can really blow, serving us some Duffy style with Adele’s “Chasing Pavement.” We see her as a contender. You go, Thia! It was (almost) worth waiting 48 minutes to hear you. But let’s not dwell on the good. We get 30 seconds on three more 15-year-olds getting tickets to Hollywood for their amazing auditions—that we don’t get to see.

“What could possibly go wrong now?” Miss Seacrest asks. Here we go. Send in the clowns. Send in a geeky Civil War reinactor and his dad who is a dead-ringer for Willie Nelson. Send in the nervous kid who is so bad we feel sorry for him. Send in the pissed off masses who were dismissed, including those who curse, fight the judges, barge out, tell the camera to talk to the hand, and even one little diva who bitch-slaps a camera. Send us an antacid: America’s search for the “next great singer” is so classy. Good news: We’re halfway through Wednesday’s episode! That’s a fist-pumping Yes!

Three-quarters of the way through the episode and just a smattering of worthy auditions, how about some more unworthiness. Yeah, that’s the ticket. Not the golden ticket, mind you. More like a ticket to Hell. Just as we reach for the shotgun and aim it at the TV, enter Scott Dangerfield (fourth photo). Smooth, resonant croons get not only the judges’ votes, but our approval. He’s JLo’s favorite so far this season. That’s too much good TV. Maybe a segment about Green Bay Packers fans in the area can help make it up. One girl is particularly annoying about the Super Bowl contenders, but that’s nothing compared to her self-described opera version of a Bieber song. Go Pack Go! No really, go.

Molly DeWolf Swenson is a recent Harvard grad and current White House intern, “but not in the Monica Lewinski way.” She starts in low register with a Victor/Victoria take on “Sittin’ on the Dock of the Bay.” She’s through to the next round. Miss Seacrest wants to call the White House to tell them, but apparently he’s already been blocked. Milwaukee montage. Milwaukee inbreds. Milwaukee jackasses. It’s been a while, so remind us where we are: Um, Milwaukee? Cue cheesehead hats. 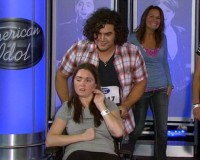 Steven Tyler macks on Haley Reinhart when she walks in, we throw up a little in our mouths, then we learn she tried out last year and was told to try again. She does and this time, gets her golden ticket to Hollywood. So does Tiwon Strong. Steve Beghun gets to go too; he’s an accountant for a Big 4 firm, tells dumb jokes but can sing, even if it’s oddly disturbing. That’s too many passes to Hollywood Week in just four minutes. What we’re craving is some crap. “Idol” delivers, plus a heaping helping of crying and cursing. Oh, fast forward button, you’re our friend now. Will you be our best friend throughout the audition portion of the season? Deal.

Let’s wrap it up with a couple of stronger auditions. Aerosmith fan and Steven Tyler groupie Alyson Jados wants to bring some Rock & Roll to the show. She does. Her pitchy versions of “Come Together” and her idol’s “Dream On” splits the judges, but Steven wants to fuck her, so she’s in, at least until he’s done with her. Chris Medina’s audition is the show’s last. His wedding engagement is on permanent hold after an auto accident left his fiancee brain damaged (bottom photo). She is wheelchair bound and palsied. Chris and the woman’s mom are her caretakers. After a story like that, you know his “Break Even” is a heart-tugger. See you in the next round, Chris.

Milwaukee’s 53 golden ticket holders —we saw only nine of them in two hours Wednesday—prepare for Hollywood. We prepare for just one hour from Nashville on Thursday.