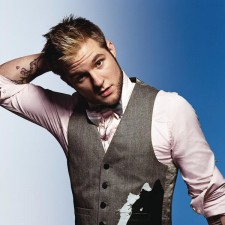 It’s a big year for Blake Lewis (photo). The “American Idol” runner-up released the dance floor-ready “Heartbreak on Vinyl,” embarked on a tour that includes Atlanta Pride, and put his face on California’s “No H8” campaign in support of gay marriage.

Lewis takes to Pride’s Coca-Cola Stage in Piedmont Park on Sunday, wrapping up the entertainment lineup and leading directly into the Starlight Cabaret. As he prepped for his tour, Lewis made time to chat with us about Pride, the death of music stores, and what fans can expect from his show.

This record is more dance/pop with darker beats, lots of different sounds. This is the record I wanted to make the first time around. There’s something seductive about a dance floor, watching people losing their inhibitions, so I wanted to capture part of that on this record.

Tell us about recording the album.
The creative process for this record was different because there was a creative process. The first time, it was me being thrown into a studio with people who had all of these ideas for me.

This time, I drove the process. I was able to do my own thing. For one song, I had a dream and woke up and went into the studio and recorded the song. Me and my friend Steve wrote this robotic love song with this really dirty beat behind it.

With other producers, I sat out and worked with people I respected, like Sam Sparro. His album was one of my favorite albums of the year last year. There’s only one song I didn’t write on this record. I also had more time for this album, which I definitely needed because I’m such a perfectionist.

What is your favorite song on “Heartbreak”?
It depends on my mood. A lot of this record is very personal to me. I’d say “Binary Love” and “Heartbreak on Vinyl.”

The title track is about independent record stores closing. I’m from Seattle, which is like Independent Record Store Central, but it’s harder and harder to find these places. I am an audiophile, so I buy all the vinyl I can find. I’m having a hard time embracing the electronic age with music delivery.

Talk to us about the tour and what to expect at Atlanta Pride.
I love being on the road, playing state-to-state, seeing fans, friends and family. I have the greatest job in the world. I love that I love to do this and that it’s my job.

My drummer and I are like a duo, so we like to mix things up onstage. We’re trying to get really technical with our show. I do a lot of sampling, and it’s more experimental. Sometimes, I like to record part of the crowd noise and bring them into the show that way, so they’re a part of it.

I’ll be playing a lot from the new record. It’s very much a pop, dance, indie, electro kind of album. Hopefully a lot of dancing. They’re going to be rocking out. I like to break things down in the middle of the show, do my beat-boxing, do some loops, maybe a ballad here or there.

We’re excited you’re coming to perform for Pride. What does being asked to perform at Pride celebrations mean to you?
It’s great for me to be a musician to communicate with as many people as possible and connecting with them is very big for me. It’s my favorite thing to do. No matter what the audience is, if people are connecting and having a good time, I’m doing my job.