Beer, munchies, apple-bobbing and rock and roll. Despite cooler-than-expected weather, those were the keystones that made the Ides of Pride concert and benefit so fun on Saturday, Oct. 17. 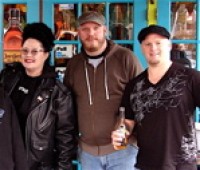 The afternoon party on the patio at Frogs Cantina featured the debut of a new look for the headliners, “trans super band,” The Sexual Side Effects (top photo).

In their first public appearance together, frontwoman Amber Taylor welcomed the band’s new bassist, Angela “Bucky” Motter, who has been a popular solo act in his own right for years. Motter sported a sexy beard, blue tips in his hair and full motorcycle leathers. His driving bass was a perfect foil to Taylor, whose soft offstage demeanor transforms to a rockin’ guttural punch behind the mic.

The opening band I’m Chinese, comprised of four straight guys, also did their part to impress the crowd on- and off-stage. A set list full of pensive lyrics and jammin’ guitar riffs set the mood early in the day, and the band members mixed easily with the alterna-gays in what turned out to be quite a jovial, almost communal atmosphere that included guys and gals, gay and straight. 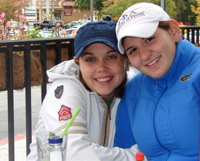 Between sets, gay mayoral candidate Kyle Keyser spoke, and five brave souls cast care to the wind and got wet in the chilly temps for a hilarious round of apple bobbing with prizes. That raucous portion of the day was emceed by none other than Ray Matheson (formerly Ruby Redd, group photo, center).