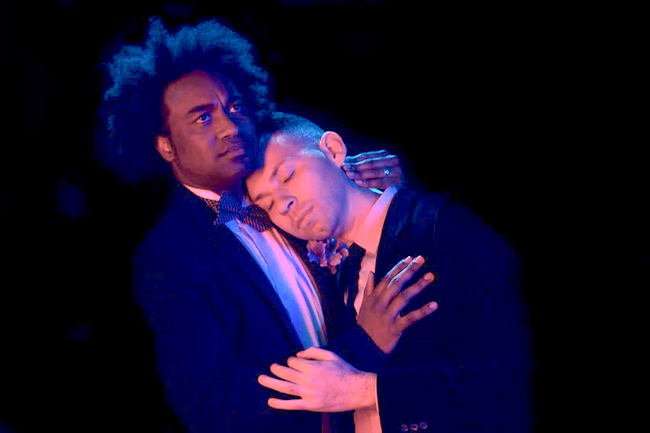 If he was looking to make a splash in the Atlanta theater scene, out actor Grant Chapman certainly chosen the right play. He plays one of the central characters in Actor’s Express’ currently running Angels in America.

Tony Kushner’s 1993 work that won both a Pulitzer Prize and several Tony Awards deals with sex, religion and politics like no other queer production. It takes place in 1985 at the height of the AIDS epidemic in New York City, and for many is serves as the defining epic about the era.

Split over two parts – Millennium Approaches and Perestroika – it’s an epic undertaking. Q catches up with Chapman (photo, right) to talk about his role as Prior Walter, a gay man with AIDS who begins having heavenly visions.

What excites you about the role?

I find the contrast of Prior's well-to-do WASP-y background with his life as a downtown sometime-drag queen and designer to be really rich, and I'm excited to continue to explore it as the run progresses.

Our costume designer Ivan Ingermann has emphasized the context of NYC's East Village underground queer art scene of the 1980s in his designs for Prior.

Why does the play remain so timely?

“Angels” introduced me to my history as a queer person in this country, and was the beginning of my political awareness. It was the first play I read where gay characters were important and worthy of an epic character arc.

We're still dealing with the consequences of the extreme government neglect people with AIDS faced in the initial years of the epidemic. That history wasn't taught to me in school. I learned it from “Angels in America.

Certainly HIV/AIDS and politics are still an issue as well, especially in the South.

Barriers to HIV education, prevention, and treatment still exist. HIV is still highly stigmatized, and in some cases criminalized. In Georgia, for example, people with HIV can serve jail time for not disclosing their HIV status to others in certain situations.

In the politics of the play, we see the seeds of our current political moment. The historical Roy Cohn, who appears as a character in the play, was a mentor to Donald Trump. Our country is caught, as all of the play's characters are caught, in this moment between moving forward into progressive change or falling backward into reactionary conservatism.

How are you handling the demands of the production – two directors (Freddie Ashley and Martin Damien Wilkins) and two shows, equaling approximately seven hours of stage time?

I'm certainly mindful that I need to take extra care of my body, voice, and overall health in order to be at my best. I'm sleeping more, not going out, have sworn off alcohol for the duration of the run, and generally keep to myself when we're not working on the show.

How long have you been acting?

I've acted practically all my life, but made my professional debut in 2005. Most recently, I've loved working with The Williams Project in Seattle where I've appeared in “Orpheus Descending,” “The Glass Menagerie,” and “Blues for Mister Charlie.”

What brought you to Atlanta?

I grew up in Auburn, Ga., about 45 minutes outside of Atlanta, and my parents frequently brought me to see theater in Atlanta at the Alliance, Actor's Express, and Georgia Shakespeare. I left for college in 2003, and spent 14 years away training and working in places like Minneapolis, Providence, and New York.

I moved back to Atlanta from New York in May of 2017, and am very excited to join the theater community here. I have family spread all around Georgia and North Carolina. They're excited I'm finally in a play they don't have to get on a plane to see!

What do you most want audiences go to get from Angels?

The play is so vast it's hard to pinpoint one thing I hope audiences get from it. I hope we're able to engage their minds AND their hearts at the same time – or at least in the same space of time.

This article originally ran in Q magazine. Read the full issue below: