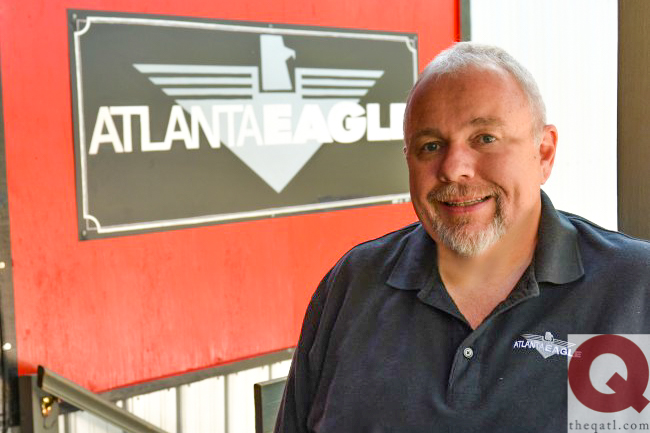 The Atlanta Eagle – one of the city’s oldest LGBTQ bars and the site of a notorious police raid – is closing next month, becoming the latest victim of a coronavirus pandemic that has dealt crippling financial blows to LGBTQ businesses.

Owner Richard Ramey (top photo) announced the end of the bar’s 33-year run on Ponce de Leon Avenue in Midtown late Thursday. He added that the bar will reopen in a new location sometime in 2021.

“We are not going out of business,” Ramey said. “We are not closing permanently. We are going to come back bigger, better, stronger than ever. It’s been a very emotional year. I am just beyond words what this year has done to so many of us.”

The Eagle will celebrate last call at its current location on Nov. 14 after two weekends of VIP closing parties. Ramey wants to celebrate with patrons in small groups during events that will include an open bar, commemorative t-shirts and giveaways of bricks from the building.

“You’ll get to leave with a piece of history. It is an iconic bar,” Ramey said.

The bar suffered financially during the pandemic with sales plummeting about 80 percent, Ramey said. It closed in early March, then reopened with limited capacity and a closed dance floor in June.

Most patrons made the decision to stay safe at home, something Ramey said he understands and respects. But the toll on the bar’s finances is unrelenting.

“That’s why I’ve decided to close and reopen when this pandemic is over. My goal, if science and the world will accept it, I’m hoping for a June opening. We will have to wait and see,” Ramey said.

“We are going to open when it’s safe for us to gather again, where we can get on the dance floor and dance again, and where we can come to a bar and not have our faces covered,” he added.

Searching for a new home – with better parking

Ramey is already scouting for a new Eagle location. It won’t be in Beltline-adjacent Amsterdam Walk, where gay bar Amsterdam recently closed after 15 years. Ramey said that the property owner there isn’t looking for a long-term tenant.

Ramey was a patron of the Eagle since it’s opening in 1987 and owner for 23 years. He said the bar’s new home will still cater to local leather, bear and fetish groups. The new location will feature signage and other remnants of the current bar, and its grand opening will feature the Mr. and Ms. Atlanta Eagle contest, a staple of Atlanta Leather Pride and the Eagle’s spring schedule, Ramey said.

“I have been a customer there for 33 years, and the thought of leaving our building has been very emotional for me,” he said. “The thought of where we’re going and how we’re getting there is just so exciting.”

“I’m so looking forward to giving our community a new home, a better home, a home that we’re proud of and a home that we can gather again,” he added.

Ramey has worked with four landlords since owning the bar. He praised the current building owner and said they are parting on good terms. Still, the building’s condition is suffering, and Ramey said he often paid for repairs when owners would not. He’s not sure what will happen to the structure once the Eagle closes.

“It’s been a challenge for me to get the work needed on the building through the years,” he said. “It’s time to move on. It’s time for us to have a new nice up-to-date location for us to enjoy.”

Ramey wants the new bar to offer better parking and no stairs. Entering the current Eagle from the small parking lot means navigating winding stairs to the deck and then climbing another steep and narrow set into the building.

“We are excited. I’m not going to tell you there’s not been a lot of tears, and there will be a lot of tears between now and the end of November,” Ramey said.

Ramey co-owned the bar with Robby Kelley when the Atlanta Police Department raided it in 2009. Officers arrested eight people and touched off a legal and political storm that lasted years and cost the city nearly $2.7 million in lawsuit settlements and investigations.

The bar struggled to regain its footing and convince customers to return in the wake of the raid, but it eventually did. The coronavirus pandemic, though, has proven to be a more formidable foe, Ramey said.

“There are a lot of bars that are operating as if nothing is going on. I absolutely respect and support those businesses. It’s just something I can’t do. I just can’t fill a dance floor full of people,” Ramey said.

He discussed the bar’s struggles in a Q Conversations event with other LGBTQ bar owners in June, then again with Project Q again in July.

Throughout the more than two decades Ramey owned the Eagle, the bar’s family of customers and employees have made him feel at home.

Justin Holsomback wants to ban discrimination against LGBTQ people in housing and public accommodations if he’s elected to the Fulton County Commission in November. The...
Read more