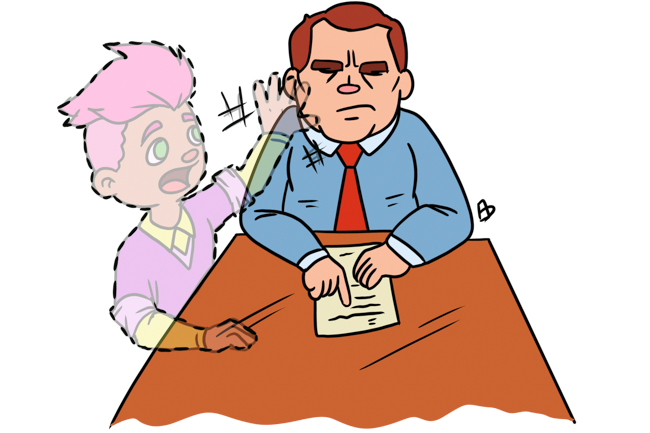 What’s the best approach for a queer, glitter-forward professional to take when their boss routinely responds to inquiries with “I have no idea what you are talking about”?

Most recently, I posed a question in a meeting with colleagues. The question was based on an e-mail the boss and I had both received.

Him: “I have no idea what you’re talking about.”

Me: Gestures to printed-out e-mail and hands it to him.

Him: Shakes head, sets it aside, and says to the rest of the people in attendance, “Anyway…”

I don’t want to see queer discrimination where there is none. I don’t want to mistake my boss’s shortcomings for a personal attack, but for as often as he has describes my words as incoherent, ignores the years of expertise that I was hired for, and refuses to understand my questions, I’m beginning to wonder if it’s because I’m queer.

I’m out at work, and I’m probably perceived as more gender nonconforming. I think most people also perceive me as smart, capable, sincere and hardworking. My boss is straight, older, rich and white. While bright and driven, he also sees life through the lens of those privileges.

Coming from a background with an alcoholic father who often misremembered or denied events, this treatment by my boss presses all my buttons. It could be just a series of shitty offhand comments, but it sets me off.

I’m not sure if I should just quit, or if the relationship is doomed.  What if we don’t get each other?

What you’re experiencing is real. Your boss’s behavior is dismissive af. The translation of his comment is, “You’re crazy,” and that is gaslighting. Whether it is based on your queer presentation or not, you indeed have a challenge on your hands.

You can’t officially call it discrimination without proof or a documented history of circumstantial evidence, but you absolutely can and should include your gut instincts as you make that determination. Most LGBTQ people have experienced enough bias in their lives to recognize it at some level.

Another thing to take into account is how your boss treats others. Do they get the same gaslighting? Is it everyone, or certain people?  Does he play favorites based on gender, ethnicity or other demographic factors? He wouldn’t be the first cis straight white man to call others crazy when they are intimidated by intelligence or when they are simply out-classed in the room.

Let’s say you determine that he is an equal-opportunity mean boss, or that his bias is latent, unconscious or unintended. Can you live with that as a permanent affliction? How much do you love this job?

You might try having an honest conversation about your concerns, but if you deem him a lost cause, you’re on your way to an answer.

On the other hand, we all have had coworkers who are annoying from the starting line. With these people, it can be difficult to separate their crazy from actually fucking with you. Knowing that might help you deal with it to get other things out of the job you might otherwise miss. Grown-ups compromise and make trades all the time, just know which ones are deal breakers for your wellbeing.

While you weigh the options, be sure to affirm your own experience and practice self-care. Your triggers aren’t other people’s responsibility, but they are yours and you shouldn’t ignore them. I’m a firm believer that a therapist or coach is always a good idea for everyone any time — talking out life’s questions with someone trained to help can improve your life whether you keep the job or not.

Enjoy past editions of The Q advice column here.