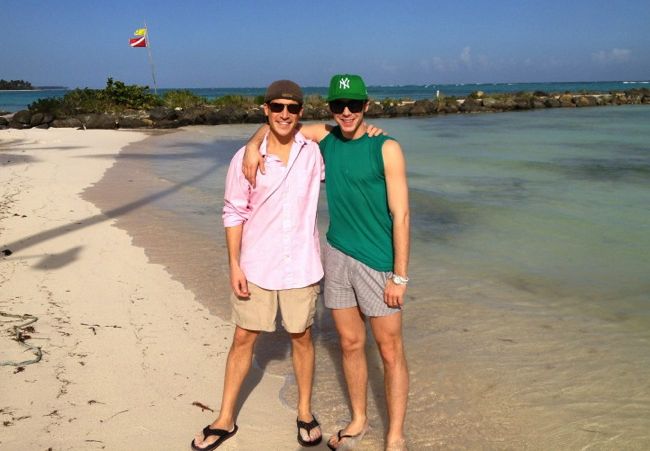 If you're Olympic fashion medalist Johnny Weir, what do you do after a court appearance on accusations that you bit your husband, Emory grad Victor Voronov? You take him grocery shopping.

That's what the hyphenated pair did on Tuesday, just a few hours after a judge dismissed the domestic violence case. Voronov filed a police report about a month before the opening of the Sochi Olympics accusing Weir of biting him during a fight, according to Radar. Somehow the incident never made news during Weir's work for NBC News during the Olympics, but his flawless (fashionably challenged?) outfits did.

On Tuesday, the judge seemed taken in by Weir's fabulousness.

Sitting next to each other, Voronov put his hand on Weir’s knee and whispered into his ear before the case begun.

Without stating any specifics about the case and charges, the judge asked if the “victim” was present and ordered Voronov to approach the bench.

Voronov asked the judge to dismiss the case – and the dismissal was granted.

What happened next? The Weir-Voronovs went shopping. As in grocery shopping.

Wedded bliss with Weir does come with asterisks, after all. Though they enjoyed some time together out on the town in Atlanta before their marriage in December 2011, Weir offered up this:

“In a sexual way, I’m gay, but I would marry a woman tomorrow if it struck me. I don’t think sex and relationships necessarily have to go together.”

And last month, Weir warned that the relationship sometimes gets a little stormy during an interview with Access Hollywood.

“A marriage between two guys is different than what I imagine a marriage between a man and a woman [to be],” he noted. “I mean, we’re both constantly trying to fight to wear the pants in the relationship.

Voronov's connection to Emory, where he graduated in 2005, got the married pair hooked into the gay-friendly school's LGBT collection. Emory announced in December that the couple will place their papers in the Manuscript, Archives and Rare Library.

The collection documents Johnny Weir-Voronov's athletic career and achievements, Johnny and Victor’s professional and public lives, and the couple’s relationship. It also contains an array of correspondence, artwork, photographs, scrapbooks and other materials Johnny’s fans have sent him.

No word on whether that will include the couple's new police report.