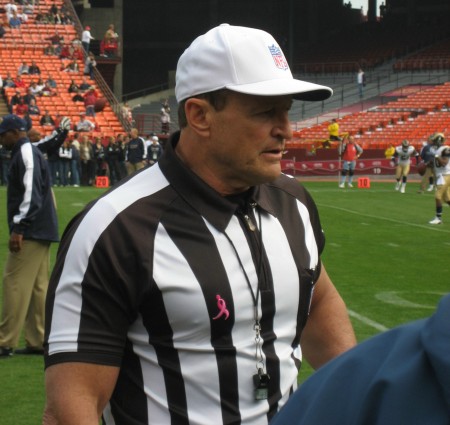 What’s been impressive in the fallout after the game is Hochuli’s personal apology and his public agonizing all week. It’s refreshing to see a veteran official take his lumps.

“I’m getting hundreds of emails – hate mail – but I’m responding to it all. People deserve a response,” Hochuli wrote to fans, according to the San Diego Union Tribune.

Affecting the outcome of a game is a devastating feeling. Officials strive for perfection – I failed miserably. Although it does no good to say it, I am very, very sorry.”

“You can rest assured that nothing anyone can say can make me feel worse than I already feel about my mistake on the fumble play. You have no idea.”

Hochuli is a favorite of some sports fans, including readers of the gay sports site Outsports.com, for his muscled frame.