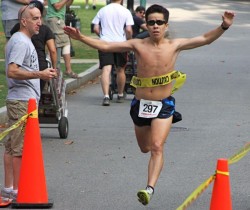 If you’re taking part in a Pride run, bring rainbow striped knee-high socks, headphones and skimpy running shorts. All of that was hand on Saturday for the 20th Annual Atlanta Pride Run & Walk.

In the last few years, the event has shifted from its traditional home in Grant Park to Ansley Mall and Piedmont Park and lost its moniker as the unofficial sports event of the Atlanta Pride Festival. But even shifting routes and Pride’s move to October haven’t slowed the annual event organized by Front Runners Atlanta. 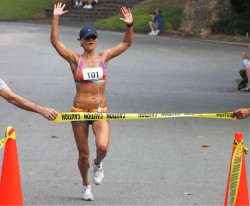 Some 487 people strapped on their running shoes and stepped off about 8 a.m. on Saturday from a starting line in Piedmont near the north end of Lake Clara Meer.

By the time the run moved out of the park, along Piedmont Avenue, east on 10th Street and back into Piedmont, Enrique Sanchez (second photo) topped the field, covering the 3.1-mile route in 16 minutes, 19 seconds. Katarina Dubcova (bottom photo) finished first among women.

Proceeds from the Pride run benefit H.E.R.O. for Children, a non-profit that works with children infected with and impacted by HIV.