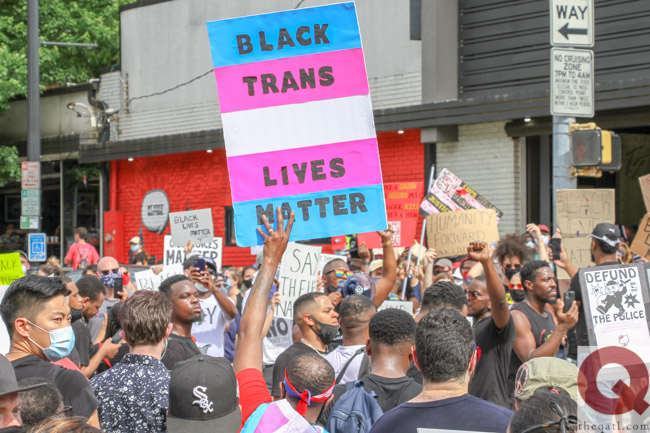 A crowd of hundreds took part in a rally and march through Midtown on Sunday to support black transgender people and call attention to the killing of a trans man by police in Florida.

The event started in Piedmont Park with a few hundred people about 3 p.m. The group swelled to hundreds more after a blocks-long march through Midtown. The event brought traffic to a standstill about 4:45 p.m. at LGBTQ Atlanta’s most prominent spot – the intersection of 10th Street and Piedmont Avenue, which is adorned with rainbow crosswalks.

The crowd chanted “no justice, no peace” and other refrains of the daily Atlanta protests and kneeled in the intersection for a moment of silence. Demonstrators called out the name of Tony McDade and other black people killed by police. Atlanta police motorcycle officers trailed the protesters to keep traffic out of reach.

McDade, a black trans man, was shot and killed in Tallahassee on May 27. He was the 12th trans person to be killed in 2020, according to HRC.

“My husband and I decided to put this together to pay tribute to Tony and all the trans women that have died by police brutality or even by human brutality. That is still a major issue not only in the straight society but in the LGBTQ society – the acceptance of trans women,” Davis said.

McDade’s killing has received some media attention but has been eclipsed by nationwide protests over the death of George Floyd at the hands of Minneapolis police on May 25. An online campaign has raised more than $205,000 for McDade’s family.

Protests in Atlanta over Floyd’s death and police brutality have taken place downtown, around the State Capitol and in Buckhead. Organizers of Sunday’s event said they chose Midtown since it’s the symbolic home of Atlanta’s LGBTQ community.

“This is our home, Midtown is our home,” Davis said. “There is no purpose going to the Capitol because we need to focus on what’s going on here before we even go to the Capitol. We can all come together as one and be one big happy family and protest. It doesn’t have to be an angry protest. It can be a fun protest, but at least we’re being heard.”

The large crowd was diverse in race as well as LGBTQ and allied identies. Signs called attention to Black Lives Matter, trans people and an LGBTQ-inclusive hate crimes bill under consideration by Georgia state lawmakers. The bill is receiving a groundswell of support.

Malloy said the event also called out racism among the city’s LGBTQ residents.

“I’ve never understood the fact of why racism exists within the LGBTQ community,” Malloy said. “We’re already oppressed as LGBTQ individuals. Why further oppress us and treat us different just because of our skin color. We need to come together. We are beautiful individuals and that is what we are focused on.”

On May 29, Georgia Equality, the statewide LGBTQ organization, joined more than 130 LGBTQ groups across the country in committing to include racial justice in their fight for LGBTQ equality.

LGBTQ and allied protesters are marching through Midtown to call attention to black trans people who have been killed. The demonstration took over 10th Street. #TonyMcDade #AtlantaProtests #TransRightsAreHumanRights #TransLivesMatter pic.twitter.com/SH1NvAG8aB

LGBTQ and allied protesters block the intersection of 10th & Piedmont during their march through Midtown. They kneeled and held a moment of silence as @Atlanta_Police motorcycle officers kept traffic away. #TonyMcDade #AtlantaProtests #TransRightsAreHumanRights #TransLivesMatter pic.twitter.com/r2Jyc22wNp