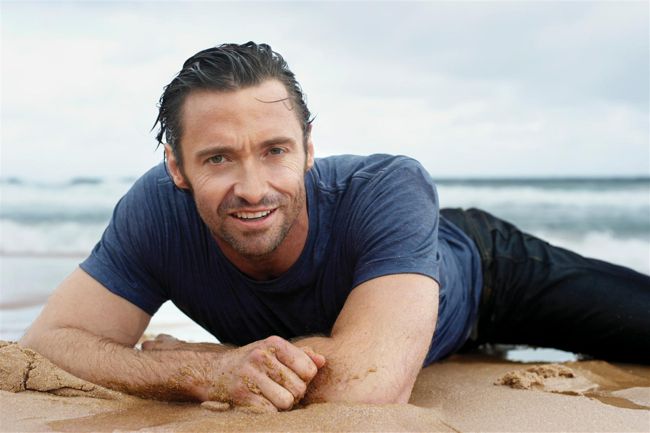 READ MORE | Please do not ask Hugh Jackman if he’s gay Hugh Jackman -- and his wife -- are a little sensitive about those pesky gay rumors. So you'll have to excuse the hairy hunk for sneaking in his workouts at an out-of-the-way Atlanta gym. But the gays are still taking notice.

Now it all makes sense! My cardio was turbo all in preparation for what just happened: A big smile from Hugh Jackman and a warm hello!

Jackman, fresh from his "Les Mis" hitting the big screen, is in Atlanta filming "Prisoners," which follows a small-town carpenter (Jackman) who takes the law into his own hands after police fail to rescue his kidnapped daughter. Friends say he's shacking up in Decatur during his stay. So it's no surprise that Jackman gets his early-morning workouts in at Core Body on West Howard Street in the gay-friendly enclave. But Jackman is no Joe Manganiello. The "True Blood" hottie gave the gays something to gawk at when he hit Atlanta last fall to film "Ten." He didn't pull a "Magic Mike" at Swinging Richards, but he did get sweaty at the gay-popular LA Fitness on 5th Street. Former CNN weather hunk Rob Marciano has been known to pump a muscle or two there, too. Meanwhile, "Prisoners" co-star Jake Gyllenhaal is spending his time in Atlanta shopping at Whole Foods on Ponce de Leon, cycling in Buckhead and staying in Midtown. Clutch your pearls, gays. He's staying in the gayborhood. Oh the abs.