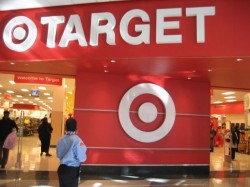 Gays targeting Target is a donations drama that just keeps on giving. Now the retail giant draws the ire of HRC for declining an “olive branch” as ads for more boycotts, rallies and cries to block new stores heat up.

It’s getting to the point that we need a scorecard to keep up with the controversy over Target’s donations to help elect anti-gay Minnesota gubernatorial candidate Tom Emmer. If you’re just catching up, Target CEO Gregg Steinhafel made the donation flap worse when he told employees that Emmer supports “our business objectives” more so than gay-friendly former Target executive Mark Dayton, then tried to back-track with an ill-worded apology. Gay employees and customers launched a boycott campaign.

Over the last two weeks, HRC initiated talks with Target execs about offsetting its pro-Emmer MN Forward donations with contributions to HRC and other gay groups. You know, the kind of “help” HRC offers for outed elected officials like Jim McGreevey and others that find themselves in a fine gay mess.

Those talks broke down in two separate “11th Hour” decisions by Target to pull back from HRC’s efforts to quell the drama, reports the Associated Press.

Fred Sainz, an HRC spokesman, said Target and his group had reached two tentative agreements over the last couple weeks for the discount retail giant to give money to various gay-lesbian-bisexual-transgender causes in Minnesota.

“Then when we were ready to pull the trigger, literally at the 11th hour on two occasions, they pulled back and said they were not ready to proceed,” Sainz said. “They said no deal. They said it was over.”

Some say it may have had something to do with conservatives threatening to become the next backlash if the company backed down.

Whether or not that’s the case, gays are moving on with protests, boycotts and general unrest. MoveOn.org launches a $35,000 ad campaign against Target on Wednesday calling for a continued boycott, including three networks in Target’s home state of Minnesota and on MSNBC.

There is little information how a weekend boycott of shopping at the stores on Aug. 14-15 may have affected—or not—Target’s bottom line, but at least one group of activists took the boycott one step further, drawing about 50 people to a picketing demonstration in the parking lot of one Chicago-area store (second photo).

The Los Angeles Times reports that San Francisco activists vow to block the building permits for two new Target stores in their area, and that HRC is pissed that attempts to make nice didn’t go their way.

Human Rights Campaign is considering whether to suspend Target’s 100% rating on its Corporate Equality Index, a measure of corporate hiring diversity policies on a scale of 0% to 100%.

“If their initial contribution was a slap in the face, their refusal to make it right is a punch in the gut, and that’s not something that we will soon forget,” said Joe Solmonese, the group’s president.

Politicos and corporations are keeping their eyes particularly peeled on Target’s handling of the whole mess, according to the LA Times. It’s the first case this election cycle of a company hit over a campaign donation just after a Supreme Court decision that allows corporate organizations and unions to use their funds in election campaigns.