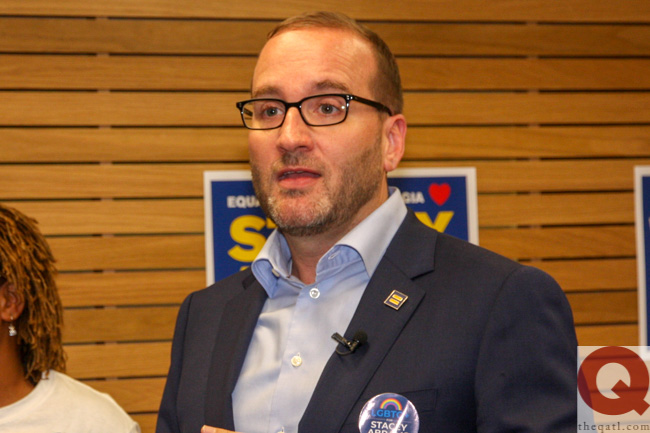 The leader of the Human Rights Campaign said Brian Kemp and Mike Pence “deserve” each other while he was in Atlanta for a get-out-the-vote event for Stacey Abrams.

HRC President Chad Griffin made the comments days before a visit by the vice president to stump for Kemp, the Republican nominee for governor. Pence visits on Thursday — National Coming Out Day and the eve of Atlanta Pride weekend.

“I think that Brian Kemp deserves Mike Pence and Mike Pence deserves Brian Kemp. They both have a long history of being anti-LGBTQ,” Griffin told Project Q Atlanta. “In fact, Mike Pence has spent his entire life attacking, demeaning and undermining the lives of LGBTQ people. So, I would say two peas in a pod. And it does not surprise me that they would be supporting one another.”

Pence will visit a Delta Air Lines maintenance facility then take part in a Georgia GOP “Victory Dinner” at the Grand Hyatt Atlanta in Buckhead according to the AJC. Georgia Equality and several other progressive organizations are hosting a protest outside the hotel at 5 p.m.

Griffin was joined by queer state Rep. Park Cannon at the Abrams event on Monday in Midtown. They addressed a group of about 20 volunteers who planned to spend the day phone banking and canvassing for Abrams.

Cannon — one of four openly LGBTQ state representatives in Georgia — spoke about Abrams’ pro-LGBTQ record in the state legislature.

“I cannot tell you how important it is for me and other [legislators] to have colleagues who care about our ability to live full lives, happy lives and healthy lives,” she said.

Griffin called it “one hell of a legacy in the state legislature” for Abrams. He then referenced Kemp’s vote in favor of Georgia’s gay marriage ban in 2004 and support of anti-LGBTQ “religious freedom” bills.

“What do we have on the other side? We have a candidate who supported a constitutional amendment to ban marriage equality. We have a candidate who wants to push forward a license to discriminate into the laws of the state,” Griffin said. “That’s not only bad for the citizens, for the residents of this state, it’s bad for business.”

Meanwhile, the Abrams campaign told Project Q that the candidate is scheduled to speak at Atlanta Pride on Saturday night and march in the Pride parade on Sunday.

“Pride is a time to celebrate the diversity and strength of our LGBTQ community, and I am honored to be a part of the celebration,” Abrams said in a press release. “I am the only candidate in this race with a record of working to protect Georgia’s LGBTQ community from discrimination. As minority meader, I opposed bills that sought to legalize discrimination and I will do the same as governor. I will also expand Medicaid in Georgia to address the HIV epidemic that is sweeping our state and impacting many in the LGBTQ community — particularly men of color.”

UPDATE | The AJC reported that Vice President Pence canceled his visit to Atlanta on Thursday due to Hurricane Michael.