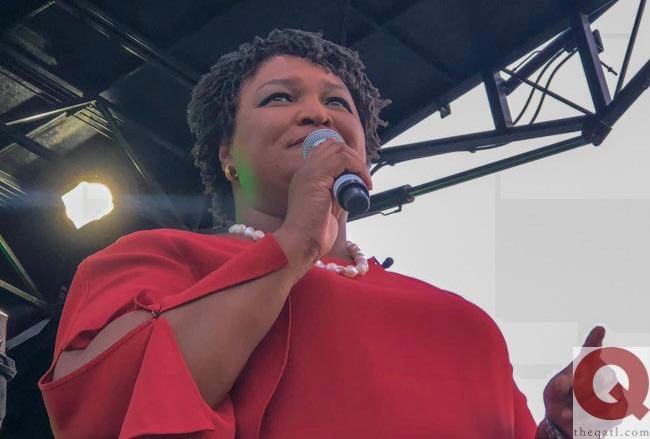 The Human Rights Campaign is making a six-figure investment in Stacey Abrams’ voting rights group to ensure fair elections for LGBTQ voters and voters of color.

The LGBTQ rights group will also provide its staff to help Abrams (photo) and her group, Fair Fight, make sure all votes are counted, according to HRC President Alphonso David.

“The right to vote is fundamental, but it has been weaponized against underrepresented minorities throughout our nation’s history,” David said in a press release. “This weaponization has primarily targeted voters of color, but it has also harmed LGBTQ Americans. That’s why we’re making this significant investment and why we can’t wait to get to work with Stacey and her team.”

Fair Fight is building voter protection teams in 20 battleground states, including Georgia, according to the press release.

Abrams partnered with HRC “because this fight is all of our fight,” she said in the press release.

“We must make sure that LGBTQ voters and all voters across the country are able to register, to vote, and to have their vote counted — no matter who they are, what they look like or whom they love,” she said.

Abrams narrowly lost to Brian Kemp in the 2018 race for Georgia governor, but she refused to concede, claiming Kemp had a conflict of interest in his role as secretary of state and that he suppressed the minority vote. She then formed Fair Fight, which sued the state’s elections board to overturn state laws that result in voter suppression, according to the AJC.

Abrams declined a run for either U.S. Senate seat up for grabs in Georgia in 2020. Four Democrats are vying for the chance to face Sen. David Perdue in November 2020. Sen. Johnny Isakson is retiring at the end of the year, and Kemp will appoint a successor. No Democrats have announced a run in that election in November 2020.

Abrams delivered a nationally televised response to President Donald Trump after his State of the Union address in February, claiming he was “attacking” LGBTQ rights. She held a fundraiser for Fair Fight with a group of lesbian leaders in the technology, political and non-profit worlds in San Francisco later that month.

Abrams was named an Atlanta Pride grand marshal in June and will help lead the parade on Oct. 13.

She also talked about voting rights at the Pure Heat Community Festival for Atlanta Black Pride in September.