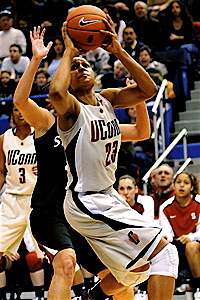 If you plan it, they will come. A sure bet in gay Atlanta is that lesbians will turn out in droves Tuesday at Amsterdam to watch the UConn Huskies go for their seventh NCAA women’s basketball championship.

Despite the local fever for the Tennessee Lady Vols, who didn’t make the Final Four this year, the women’s championship is still a huge event for Atlanta’s female sports fans. HRC Atlanta realizes the game’s appeal and hosts the viewing party on Tuesday as UConn takes on Stanford. Ranked 1-2 at the beginning of the season, the two teams fulfill that destiny in what should be a great game.

The event on Tuesday is one of several sponsored by HRC leading up to its gala dinner on May 1. The series opened Jan. 28 with a low-key reception at Bellissima where organizers introduced the dinner’s theme—“Every Day”—and tipped off the crowd that Andy Cohen, Bravo’s chief gay and a senior vice president responsible for those addictive reality shows, will join the dinner to receive HRC’s Visibility Award.

UConn and Stanford have met four times in the Final Four, but never in a championship game. When they faced each other in December, UConn took the game 80-68. But experts say that’s no predictor.

That home game for UConn in Hartford came at the end of a nine-day road trip for Stanford. The odds are leveled for the championship on view at the HRC party: The game is played in neutral San Antonio after a pretty breezy Final Four track to the championship game for both teams.

Of course, fans headed to Amsterdam on Tuesday know that UConn boasts the one-two punch of Maya Moore (photo) and Tina Charles, who have spearheaded the team’s domination all season. If UConn is victorious, it will nab its seventh championship.

With giant video screens, plenty of space and a full dinner menu, Amsterdam is one of the hottest venues in Midtown for watch parties. Pay no cover, and get there early for a prime seat.