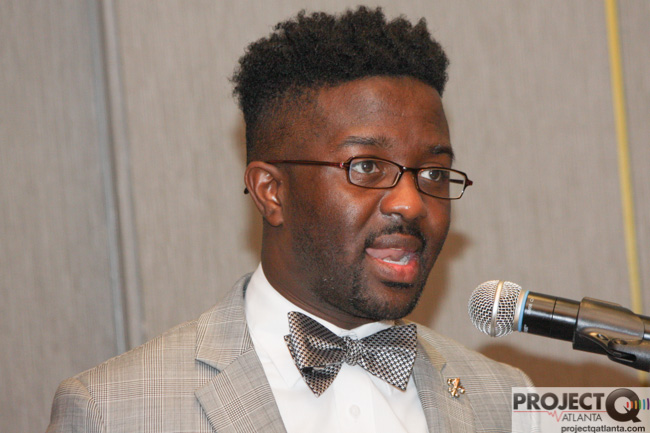 THRIVE SS co-founder Daniel Driffin will join acclaimed actors and a member of Congress in being recognized at the 32nd Annual HRC Atlanta Gala Dinner & Auction.

The local HIV/AIDS activist will receive the Dan Bradley Humanitarian Award at the event on May 4 at the Hyatt Regency Downtown Atlanta.

“I will tell anyone, I don't wake up each day to get accolades — it's truly about creating a safer, environment for people living with HIV, especially black same-gender loving men,” Driffin (top photo) told Project Q Atlanta. “I remember right after learning my status in 2008 and feeling isolated. I still hear young gay men say the same thing. We have to move to a place where that isn't so.”

“I am grateful in this moment, but more work continues,” he added.

Driffin, 33, is the deputy executive director of Living Room, a non-profit that provides housing support for people living with HIV. He co-founded THRIVE SS, a support group for gay men of color living with HIV, in 2016. He spoke at the Democratic National Convention in 2016, making him the first person to talk about HIV from the convention stage in 16 years. Georgia Equality honored him with the Allen Thornell Political Advancement Award in 2017. He is currently a member of the Fulton County HIV/AIDS Prevention, Care & Policy Advisory Committee.

“HRC Atlanta applauds Mr. Driffin’s dedication and positive impact to the local LGBTQ community,” Matt Garrett, a member of HRC’s Board of Directors, said in a press release. “Atlanta ranks fourth among U.S. cities in new HIV diagnoses within certain populations. Black and Latinx men experience higher cases of HIV diagnoses than their white counterparts, have less access to resources, and have increased barriers to care. This proves a vital need for THRIVE SS’s outreach programs and the importance of Mr. Driffin’s work.”

“We are proud to honor Mr. Driffin with this award,” Garrett added.

HRC will also honor Georgia Alliance for Social Justice with the Leon Allen and Winston Johnson Community Leadership Award. The group organized the 2017 Atlanta March for Social Justice & Women, drawing more than 60,000 participants. They launched Power to the Polls in 2018 to increase new voter registration and mobilize underrepresented communities.

“On behalf of GAFSJ, we would like to share this award with our members who have marched, volunteered and donated to support our work,” Janel Green, executive director of GAFSJ, told Project Q. “Together we have built a coalition to stand together and fight for equity for all Georgians. Thank you HRC Atlanta. We are so proud to work with you!”

Charlie Frew, vice chair of the HRC Foundation Board of Directors and executive director of Jerusalem House, said GAFSJ has “worked diligently to build coalitions across many communities to organize the voices of underrepresented Georgians.”

“They have led marches and rallies to resist actions from the current administration and fought for the civil rights of women, people of color, immigrants, LGBTQ people and many others,” he said in a press release. “The Georgia Alliance for Social Justice continues to be a leader for progress, advocacy and change. We are proud to honor them with this award.”

McBath (second photo) marched in the 2018 Atlanta Pride parade, has spoken out against the Trump administration’s transgender military ban and she supports the Equality Act.

“By working to achieve crucial non-discrimination protections for our community, Rep. McBath is a key leader in our effort for full federal equality, and we are honored to welcome her to the 2019 HRC Atlanta Gala Dinner,” he said in a press release.

McBath faces off against Handel again in a rematch for the 6th District seat in 2020.

Tony and Grammy-winning actress and singer Cynthia Erivo will receive the HRC Ally for Equality Award. Erivo is best known for her performance as Celie in the Broadway revival of “The Color Purple.”

“Cynthia Erivo is a multi-talented artist who is using her platform to lift up the LGBTQ community,” said Griffin. “On the page, stage, screen and beyond, Cynthia Erivo is leaving her mark on American culture while proudly standing with us as a fierce ally and advocate.”

Actor, writer and producer Ryan O’Connell will receive the HRC Visibility Award at the event. O’Connell based his Netflix coming-of-age comedy “Special” on his life as a gay man with cerebral palsy.

“Ryan O’Connell is an incredibly gifted artist and activist who is inspiring LGBTQ young people, people living with disabilities and so many others across the country,” said Griffin. “As a writer, actor, producer and advocate, Ryan O’Connell is changing countless hearts and minds by boldly speaking out for fairness and equality.”