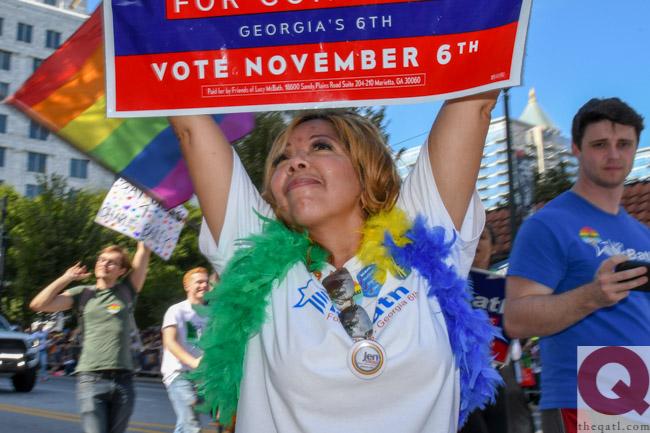 The Human Rights Campaign is backing “pro-equality champion” Lucy McBath in her rematch against Karen Handel in a U.S. House race in metro Atlanta.

McBath (photo) said she was proud to get the endorsement and called Handel an “extremist.”

“I will always fight for what is right and work tirelessly to ensure that everyone is treated fairly,” she said in a press release. “I stand in stark contrast to my extremist opponent, Karen Handel, who scoffed at the idea of supporting equality for all.”

HRC announced its endorsement in the 6th Congressional District race on Jan. 28. The group cited McBath’s opposition to President Trump’s ban on transgender soldiers in the military and her support for the Equality Act.

Voters rejected “the politics of fear and division” when they elected McBath over Handel in 2018, according to HRC President Alphonso David.

“Now, it’s time to make sure those leaders have the support they need to continue to work on behalf of all Americans, including the LGBTQ community,” he said. “The Human Rights Campaign is proud to endorse Congresswoman McBath’s bid for reelection and we look forward to continuing to fight alongside her for full equality.”

McBath said Handel was “actively working to tear down and undermine the LGBTQ community” at HRC’s annual gala dinner in Atlanta in May.

She doubled down on her opposition to gay adoption in the final days of her 2017 race against Jon Ossoff, but was still able to win the 6th District seat. Handel then lost to McBath in the November 2018 election.

Handel is the frontrunner in the GOP primary, which takes place in May. Marjorie Taylor Greene switched from the 6th to the 14th Congressional District race in December, according to the AJC.

Greene said on Facebook in April that transgender people are “gender pretending.” She also said a Drag Queen Story Time event in Alpharetta that month was “an attack on our children” and called the entertainer who hosted it “an abomination.”

Another GOP candidate named Donnie Bolena dropped out of the race in August after publicly identifying himself as a white nationalist. He also said he wanted to go to Congress “to say it’s okay if you don’t want to accept homosexuality.” He later reentered the race.