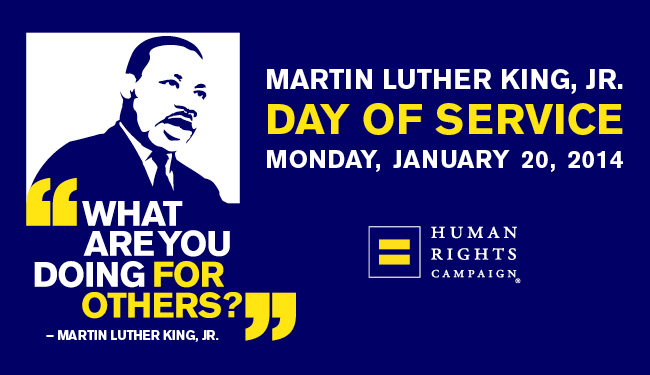 Except in Atlanta. Which is ironic, given that it's the cradle of the Civil Rights Movement, home to MLK's church and his birthplace. But progress is progress, right?

The national gay rights group, oft criticized for its lack of diversity among its gala dinner attendees or the issues it backs, on Monday started hyping its MLK Day of Service, bragging that it's “perhaps the first and only national LGBT civil rights organization in this important Day of Service.” Perhaps.

For its part, HRC will focus its efforts on Jan. 20 on helping gay youth. Or something like that.

Except that of the events HRC lists, not a one takes place in Atlanta. Despite a May fundraising dinner that attracts more than 1,000 people. Despite homeless gay youth squatting in buildings. Despite this guy still having anything to do with gay youth. Maybe they should call this guy, who helped create Lost N Found's massive new Thrift & Consignment store to support the non-profit's efforts to help LGBT youth. Or these folks, who host an LGBT brunch every year to call attention to the MLK holiday.

But hey, please tell us more HRC. Because in Atlanta, we've never heard of this King fella.

Dr. King too saw a society of “two Americas” in which, because of their race, people were denied equal employment opportunities, quality education, and access to livable & affordable housing. This is still a reality today for many people because of their race, sexual orientation, gender identity, or other facets of their identity. The intersections of our issues are still very much alive and relevant, and that is why, on this Day of Service, we echo Dr. King’s call to unite and achieve his vision of “beloved community” in which each person can achieve their full potential in one America.

UPDATE | About 90 minutes after we publisehd this post, HRC Atlanta tweeted details of a local event. The group will support the LGBT brunch, mentioned above and march in the MLK parade.