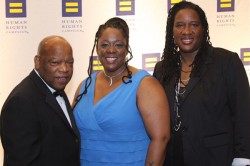 None of the honorees and special guests among the crowd at the Atlanta Human Rights Campaign Gala Dinner on Saturday summed up the evening better than Simone Bell: “We have work to do, so let’s get busy.”

The newly-minted state representative, fresh from her first legislative session at the Gold Dome, was on hand with partner Val Acree to receive the Dan Bradley Humanitarian Award. Bell received a standing ovation from the crowd of nearly 1,000 people gathered in a ballroom of the Hyatt Regency in downtown Atlanta.

“What I need you to do is be proud to be lesbian, gay, bisexual and transgendered July through June, to realize lesbians, gays, bisexuals and transgendered people live outside the city limits, and to say out loud, not just LGBTQ, but to say lesbian, say gay, say bisexual and say transgender, to say the words [and] to show interest in other people’s and other communities’ issues,” Bell told the crowd. “We cannot ask them to help us without offering our help.”

She became the first African-American lesbian elected to a state legislature in the U.S. when she took office last December. Bell, who doesn’t face opposition in her campaign for a full two-year term in November, was one of three award winners at the HRC dinner and one of several elected officials who attended. Bell also received an autographed copy of “The Collected Autobiographies of Maya Angelou.” 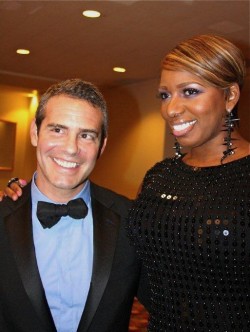 Bravo’s Andy Cohen received HRC’s Visibility Award, while transgender activist Vandy Beth Glenn received the Leon Allen & Winston Johnson Community Service Award. Cohen is the programming guru behind several of the network’s reality programs that include gay characters. Glenn is the trans woman who sued for employment discrimination when she was fired from her staff position at the Georgia General Assembly and testified before Congress in favor of the Employment Non-Discrimination Act.

“I hope big recognition like this for injustices in the workplace will do more to correct the other injustices in the future,” Glenn says. “Transgender people are fired every day in the U.S., and most don’t have legal experience and recourse that I have. I accept this award humbly on their behalf.”

Cohen talked of starting his career with CBS News in New York City some 20 years ago as an out gay man and fast-forwarded to his work with Bravo and credited the network with presenting LGBT characters matter-of-factly. He also revealed that NeNe Leakes, a gay favorite of “The Real Housewives of Atlanta,” and her other castmates were mid-way through taping the third season of the reality show. Leakes introduced Cohen at the dinner.

“I’m so proud to be part of the fabric of Bravo,” Cohen says. “Not everyone lives in Bravoland and there is work to be done.” 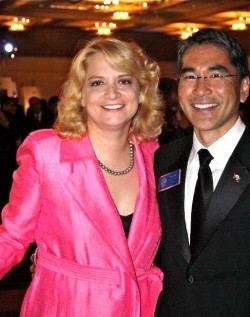 Leakes, who called Cohen “buttercup,” was in typical over-the-top character during her brief remarks.

“Y’all are looking fabulous and you know I will tell it like it is. I love the gay community. Hello,” Leakes said. “Y’all are serving fabulous drinks and I am going to drink until it’s time to go.”

“We need a place where we can be ourselves,” Haggray said. “I believe that at the end of every day, change happens.”

Atlanta Mayor Kasim Reed, who pledged in an interview last month that he would attend the HRC dinner, was not present. A spokesperson said the mayor was traveling. 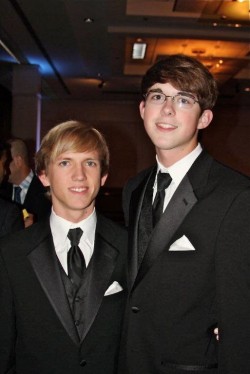 “I learned very early the power of political change,” Cicilline said. “Running for office as an out candidate matters. Getting elected matters even more so.”

Last year, the HRC dinner raised about $300,000 with a crowd that dipped to about 900 people, some 15 percent less than a year earlier. A final tally on how much was raised on Saturday is not yet available.