How you can help Chick-fil-A craft a new slogan 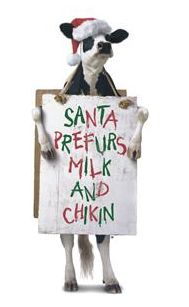 Atlanta-based Chick-fil-A, which likes its anti-gay sauce almost as much as its $3.6 billion in annual sales, wants your help creating a new slogan. Oh yes, creative gays, here’s your chance to dish the diss as well as the chicken giant does.

On Thursday, the company made time between stuffing your stocking with its new calendar and adding to its $2 million in donations to anti-gay groups to tweet this:

Fill in the blank and RT with your answer: If Chick-fil-A created a new slogan, it would be ____.

The gays are already responding with suggestions including “We hate the gays” and “That you are closed-minded people that should be ashamed of themselves.”

But we’ve got higher expectations for you. So put on your thinking caps and leave your best suggestions in the comments below. Think snappy and snarky. You know, like us. Maybe company President Dan Cathy will wear it on his t-shirt during next year’s AIDS Walk Atlanta 5K Run.