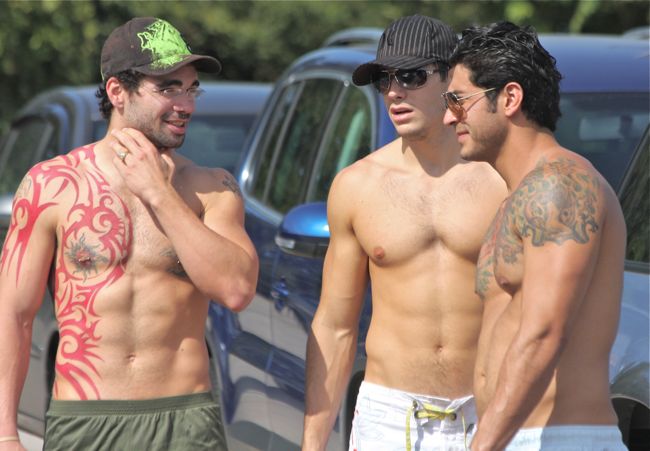 Somehow, Atlanta got more butch. Maybe it’s all those gays moving to the mountains. Or those muscular carwashes. But don’t shake your manly fists in celebration just yet – Atlanta is still No. 23 on the list, behind Nashville and Charlotte. Ouch.

What’s dragging us down from snatching the No. 1 spot? Our guess is a city full of versatile men. Liars – you’re bottoms and you know it.

Despite that, Atlanta jumped nine spots since the 2010 rankings to land at No. 23 in the list of America’s manliest cities. Since the gays here profess to be so versatile, let’s put it like this: Atlanta is sandwiched between Richmond, Va., and Chicago.

No. 1 on the 3rd Annual America’s Manliest Cities? Nashville. Really. It’s the rodeos and pickups that propel the Music City to, ahem, top the manly list. Wait, we’ve got NASCAR just down I-75!

“The study compiles manly metrics of each city like the number of home improvement stores, steak houses, manly occupations and motorcycles per capita,” say researcher Bert Sperling and Mars Chocolate North America, who organized the study. “But just like a high concentration of construction workers can boost a city’s manly measure, an excess of cupcake shops and fancy furniture stores can hurt a city’s rank.”

Yes, Cantoni. They are talking to you.

Just to recap: Atlanta is full of sloppy dressers, we lost our Gayest City in America crown and now, some candy bar makers say we’re only middle of the road manly. We’re going to get a complex.

How does Atlanta crack the Top 10? Invite the researchers to the Dyke March next month. Please. You know it’s true.