How Trump Era realities pushed ‘Angry Fags’ over the edge 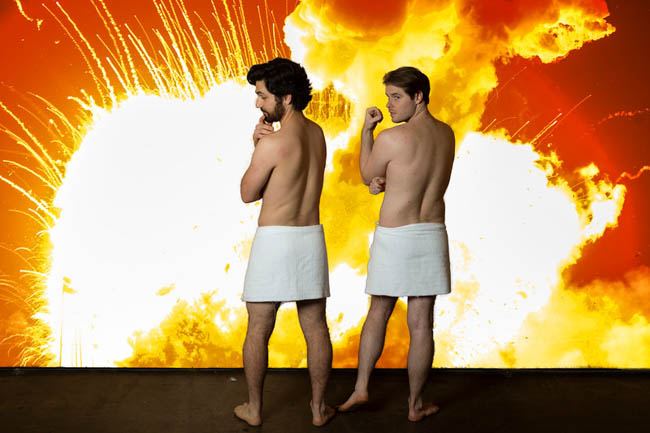 When Atlanta playwright Topher Payne’s dark comedy Angry Fags made its 2013 world premiere, its tale of good gays gone bad was mostly fantasy. Sure, it hit disturbingly close to home, but we could tell ourselves that its heart-pounding crescendo still felt like a bit of a stretch.

“The argument I made in 2013 is that progress is slow but does happen, that we have to be careful not to give in to temptation to adopt tactics of those who would seek to oppress us,” Payne tells Q. “I believed we were on an arc toward progress, and in the last few years, that has been proven not to be entirely true. Things we thought were resolved are apparently up for negotiation or apt to disappear entirely.”

The original version of the play was billed as “Oscar Wilde meets Fight Club in a fever dream.” It seduced audiences with gut-busting wit and insight, which was a deceptive emotional setup to wreck us with increasingly dark, messy matters both personal and political.

Every queer who was ever fed up with haters and the slow plod toward equality needed to see the original Angry Fags. Now it’s practically a queer mandate to see the updated version.

As Payne set out to update and polish the show before officially publishing it back in 2016, there were a few political developments — the passage of marriage equality in the U.S., the assumption that we were about to elect our first female president — which he wanted to incorporate to make the piece more timeless.

“Then November happened,” the writer says. “In the original version, the religious right was the enemy, and at least they were very specific about what they hated about us. Now those same people are willing to set aside their theology to bow down to … whatever this is.”

With so many people on the political left, and indeed in the middle, now at their wits end, the central question of Angry Fags becomes scarier, and perhaps, even more realistic:

What happens if we stop being Mr. Nice Guy trying to reason with the rest of the world and get mad as hell instead?

The answer is not pretty, and that’s exactly why Angry Fags remains so important. Updates only up the emotional ante.

“I’m braver, I’m doubling down,” Payne says. “Where the original touched on tough issues of gender and race, this one leans in, which of course just makes it messier and more complicated.”

That includes new characters like a newscaster representing the media and a black female Republican lawmaker.

“I kept everything that traumatized audiences last time and just kept going,” Payne continues. “What scares me now is how segmented and fragmented the cultural conversation has become. We can find someone to agree with whatever crazy ass thing is in our head, and radicalism springs from the belief that there are no other valid points of view.”

But wait. This is a comedy? Let’s just say that you wish you had the rapid-fire, side-splitting banter between friends shared by gay roommates and titular “fags” Cooper and Bennett.

“Both comedy and tragedy are born out of extremes,” Payne says. “These are very funny people in a very serious situation. I set out to write a story of friendship between two gay men, and at the core of this is a friendship where they, through no intention of their own, bring out the worst in each other.”

Atlanta theater doesn’t often rip my heart out and leave me thanking it for the privilege. In 2013, this play put words to thoughts I’ve had but was afraid to say. The update is sure to exponentialize the dreadful idea that it might take the anger of a fed-up “angry fag” to start a violent revolution and see it through to its chilling end.

After the original, I texted the playwright, who is a friend and colleague, with a quick review: “You’ve written a play of major import. It left me gutted, sobbing and …angry.” To which he replied, “Mission accomplished.”

Angry Fags opens at 7 Stages on March 30 and runs through April 14. Visit 7stages.org.