How Tom Daley and James Franco come out 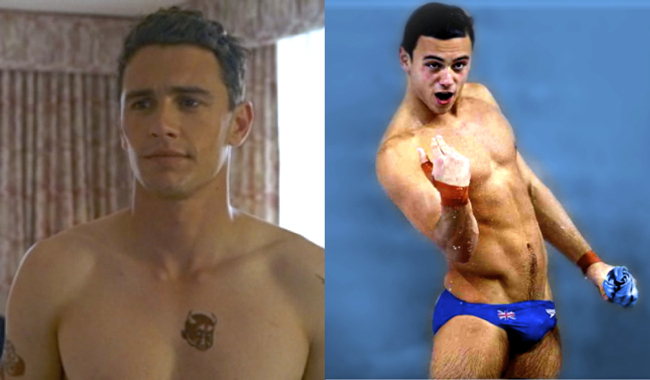 What’s the difference between one sexy celebrity admitting he’s straight and any other one doing the same? When it’s the gay favorites James Franco and Olympic diver Tom Daley, almost everything.

Both men have been hounded by gay rumors, sometimes based on circumstance but most often on the hope that their brand of sexy is batting for our team. Last week, both men addressed the rumors – Franco for the umpteenth and Daley for the first time – by appropriately laughing them off and coming out as straight. That's where their similarities end.

Neither gives a lick who people think they lick, they say. More power to those who believe it, they continue, and props to our gay fans by the way. Right answer. Then why do their responses feel so different?

Franco actually takes it further. “I wish I was gay,” he tells the Daily Beast. Going all philosophical, the actor says that being called gay is the easiest part of rectifying his public image as a Hollywood A-Lister with his true self.

“If that’s what they were going to make fun of me for, I was like, ‘Great! Bring on the gay jokes!’ because these aren’t insults at all. I don’t even care if people think I’m gay, so it was like, ‘Awesome!’ I mean, I wish I was. I wish I was gay. … part of it is that movies are a place where people can project things and identify with characters, and it’s the same thing with actors outside of their roles—and it’s been that way since Hollywood was around.

“My relationship with my public image over the past four or five years has just become weirder and weirder, because I look at it and it’s me, and it’s not me, so if other people want to use that for their own purposes or needs, I’m fine with it.”

But when Daley likewise takes his statement further, our eyebrows raise like the hairs on his happy trail. As he insists “I’m not gay,” it feels more like Ellen Degeneres or Neil Patrick Harris on the cover of People saying the opposite. Like it needs clarification.

“I think it’s funny when people say I’m gay… I laugh it off,” says Tom, who was voted the world’s ¬sexiest man by iconic gay magazine Attitude last week.

“I’m not. But even if I was, I wouldn’t be ashamed. It wouldn’t bother me in the slightest what people thought.

“But I can understand why I have a massive gay following – I spend most of my life half naked in trunks on a diving board showing off my bare chest.

“I often joke I wear more to bed than I do to work. But I’m cool with my gay following. It’s great to have gay fans even though my friends gently take the mick.

“If people think I am gay or that I don’t focus on my diving enough and go out too much, there is always going to be an opinion – and if I worry about that too much, then my diving goes downhill.”

If that seems long winded, he goes on – and on – about all the times female fans have swarmed him, but not the right ones. And he had a girlfriend once in another city, but doesn’t any more. And how he really does want a girlfriend, but he doesn’t have time for one anyway… blah blah blah

Doth Daley protest too much? History will decide. Does it set Daley up for a second coming out, a la Ricky Martin and Wentworth Miller, both of whom directly denied it for years? Maybe, but like them it will be in his own time if that's indeed the case. Also like them, he would be welcomed as another accomplished LGBT icon and role model for gay youth. And Morning Fix obsession.

Of course, all that Daley-centric gaydar could just be off this time. Unike Franco, he doesn’t shoot in gay leather bars, play gay icons Allen Ginsburg and Harvey Milk’s lover, and he doesn't go around making out with himself.