How to recession-proof your lifestyle 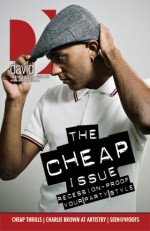 David magazine went cheap this week. As in offering ways to recession-proof your gay lifestyle.

When it comes to fashion, much of the advice is pretty simple, but nonetheless helpful in these lean times.

You don’t have to spend a million to look like a million. It sounds trite, but it’s completely true.

When it comes to partying, the magazine suggests a staycation of sorts. Stay in and invite others over.

Invite friends over and make it pot luck. Organize it, or else you could end up with four lasagnas.

Always have BYOB. Assign everyone a type of liquor so that you will have a full bar.

Ask someone to bring mixers.

Have everyone bring their own IPod so you can all take turns playing DJ.

And there’s the art of finding secondhand tunes.

Remember that album you just had to have in 1993 because it had that one great single on it? Well, it’s 2009 and you probably downloaded that one single years ago onto your iPod, so please say you’ve already sold the album, right?

If you haven’t, maybe you need to purge your CD and record collection and head to some of Atlanta’s used music stores. A variety of options are available for you to make some money from your used CDs and LPs.