How to help Georgia Equality double your money 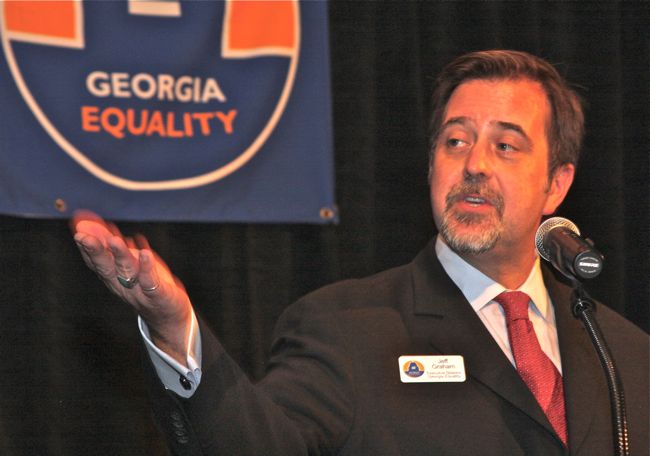 Double your money? It’s the easy slogan of gambling schemes and worse. But now, the phrase takes on a new and real meaning for those gay do-gooders at Georgia Equality.

The statewide gay rights lobby operates on a slim budget, and their Spring Equal-A-Thon fell short of its goals, pulling in a modest 30 new donors and $4,710. The results were better for their 7th Annual Evening for Equality last month, which saw more than 200 people and raised about $22,000.

But still, there’s this: With an estimated 300,000 LGBT living in Georgia, the non-profit has just 300 supporters who have made a donation in the last year – about one-tenth of one percent of all those gays in every corner of the state. Yet the group is expected – and does – an outsized piece of the activism, legislative and political work to address LGBT concerns.

Jeff Graham (top photo), Georgia Equality’s executive director, ticked off a list of the group’s accomplishments at Evening for Equality, including a successful counter-demonstration to a National Organization for Marriage protest in Atlanta last summer, expanding and renovating the Rush Center, speaking out against the anti-gay rant from Braves coach Roger McDowell and meeting with the team in its wake, supporting state Rep. Rashad Taylor in his recent coming out, introducing the Georgia Fair Employment Practices legislation, and working to prevent proposed cuts to the state’s AIDS Drug Assistance Program.

Graham and the Georgia Equality clan also hang out in the White House to get their message across.

They also partnered with other groups to form the Georgia Campaign for Safe Schools to toughen the state’s anti-bullying law and implement it in school districts across the state. This is where the double-your-money piece comes into play.

Thanks to a grant from the Unitarian Universalist Fund for a Just Society, Georgia Equality is able to double your donations to help boost its work on bullying issues. Here how it works: Donations from new donors up to $2,500 will be doubled. In other words, toss them $20 and, because of the grant, it turns into $40. Pretty easy stuff.

The campaign was announced in June, but Georgia Equality said last week that they are still in need of a few more donors.

“Adding $5,000 to the important anti-bullying work we are doing around the state will be a huge step forward,” the group said in an email last week. “This is a unique and time-sensitive opportunity; the faster we raise this money, the faster we can continue our work with the school districts. Our children deserve to feel welcome and secure at school and we are committed to eliminating bullying so they will be safe when they return this fall.”

You can even make the donation online. You missed your chance for an autographed Lady Gaga CD or a cute tote bag. But get to donating, ask nicely and who knows, maybe they’ll chip in a “Equality On My Mind” bumper sticker.