How the Eagle raid impacted the Blake’s fight 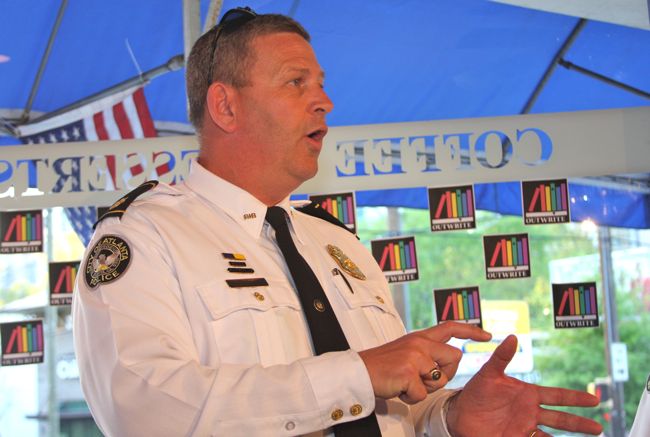 If you think the Atlanta Police Department didn’t learn a thing or two from their botched shitstorm of a raid at the Eagle in 2009, just take a look at their response to the Blake’s kerfuffle on Saturday.

There’s no way to fairly compare the two incidents. One was a premeditated, warrantless raid on a gay bar orchestrated by a handful of rogue, anti-gay cops with an ax to grind. The other was a disturbance sparked by two drunk queens upset for being called out for pushing their way to the front of the toilet line.

The lessons learned from the Eagle raid, though, impacted the response from Atlanta police to the early morning incident at Blake’s. Here’s how: Even the whiff of allegations that cops did something wrong in their response on Saturday brought a strong and swift response from department brass.

But unlike the Eagle raid – when the department hunkered down, portrayed Eagle patrons as sex-whoring drug users and defended the raid – top brass from the department asked for people who saw any wrongdoing on the part of officers at Blake’s to come forward so they can investigate and move for disciplinary action. They pushed for witnesses in their initial statement about the incident on Saturday; top commanders continued it on Monday during a meeting of the LGBT advisory board for Atlanta police.

“APD takes these types of allegations very seriously,” said Major Chris Leighty (top photo), who oversees Zone 5, the police district that includes both gay bars. “This is all still part of the healing process and we understand that. We had a very tragic incident that occurred at the Atlanta Eagle club that we realized compromised our trust with the community and we realize that. Everyone within city government wants to make sure our relationships are normalized.” 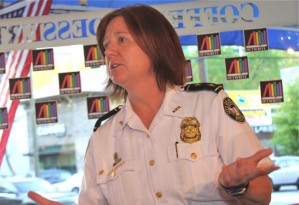 Deputy Chief Renee Propes (second photo), the highest-ranking openly lesbian commander within the department, said on Monday that the agency has launched an internal affairs probe into the incident that will include interviewing all officers who responded to the bar. An off duty security officer called for help when he was allegedly assaulted by two bar patrons who were asked to leave and later arrested.

Leighty said the incident report, which has not yet been released by the department, includes statements from seven witnesses. None of those statements include allegations of misconduct that a witness told Project Q on Saturday included some officers calling patrons “princess” and “sweetie,” and ordering him to delete video he recorded of the incident.

“We want to get all of the facts and all of the information so we can make a really good assessment of what occurred,” Propes said.

Leighty said police responded in large numbers to assist the off duty officer at Blake’s, but that’s not unusual when an officer requests assistance.

“Anytime an officer puts in a call for assistance and they are in fight, the initial responding officers may be brusk. Our number one concern is the officer and making sure everything is safe. But it doesn’t give us the right to say inappropriate stuff. It only takes one officer saying something to indict us,” Leighty said.

Unlike the Eagle raid, when bar employees and owners rightly condemned the police action, employees of Blake’s are stepping forward to say Atlanta police reacted responsibly. Lynn Barfield detailed the incident and police response in a Facebook post, while Doug Edmisten, the bar’s operations manager, and bartender Leslie Wilson spoke out Monday during the advisory board meeting.

“I did not hear an officer ask anyone to stop videoing an incident,” Edmisten said. “The backup APD did not enter the Blake’s building. APD did not call anyone names. The backup APD arrived quickly and were totally professional.”

The differences in response to the Eagle and Blake’s incidents are seen even among the area’s City Council member. In 2009, then-City Council member Anne Fauver couldn’t be bothered with the Eagle raid. Alex Wan, who replaced Fauver as the District 6 representative, has been tracking the Blake’s incident since Saturday, talking with police and city officials and speaking out at the advisory board meeting on Monday.

“Everything that happened when I engaged in the situation is exactly what I would have expected to happen – the LGBT liaisons were contacted and within two hours, I got a call from the Office of Professional Standards and they were ready to gather any information about the case,” Wan said. “There was no denial at any level. All that was done was the presentation of the facts as the officers knew it. There was a genuine desire to gather the facts. I want to caution our community not to jump to quick conclusions and stir up everybody.”