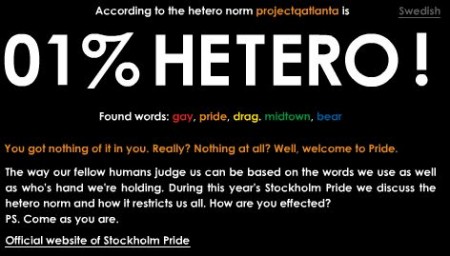 When it comes to the Project Q Atlanta Twitter feed, we’ve got some of the most, um, gay tweets around. Though surprisingly, we’ve still got a little hetero in us — about 1 percent, to be exact.

That’s according to a fun new app called How Hetero? It’s a brilliant little piece of marketing from the folks organizing Stockholm Pride that allows you to check the hetero factor of any Twitter account.

Atlanta Pride, by the way, is also 1 percent hetero. Anderson Cooper’s Twitter feed? Some 91 percent hetero, which made us laugh out loud. And we couldn’t find a Twitter feed for Tyler Perry, who probably avoids the social networking site for fear that his hetero index would be non-existent.