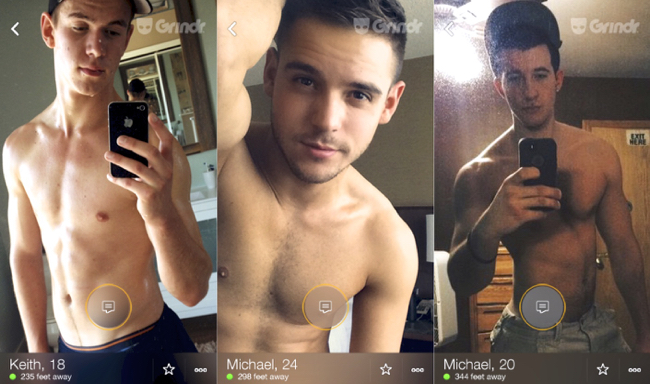 LGBT activists pulled out all the stops to battle anti-gay bills during the recently wrapped legislative session. Lobbying. Rallies. Phone banks. Petitions. And yes, even Grindr. 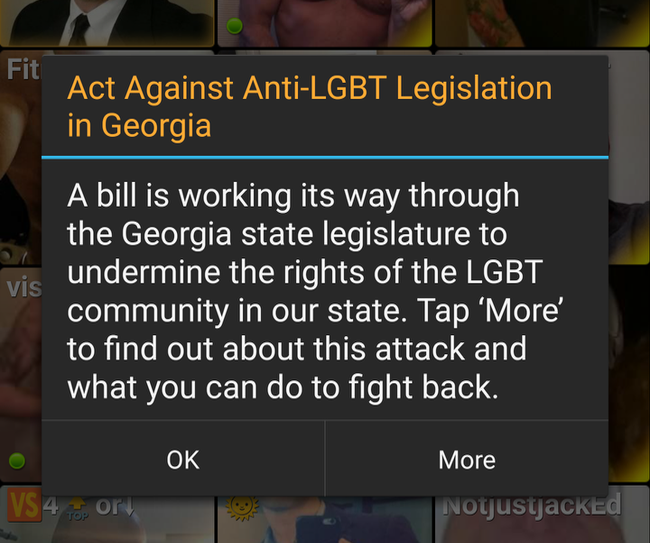 Call it a political cockblock. Maybe even savvy marketing. And in the fight against anti-gay legislation, anything and everything could help.

Clicking on the ad led users to an electronic form letter on HRC's website where they could register their complaints about the bill directly with Deal. Or at least the poor intern with the unlucky task of reading and collecting them for the state's CEO.

Thank you for your recent statements on discrimination and your desire for the legislature to avoid “setting up the situation where we could be accused of allowing or encouraging discrimination.”

Unfortunately, that's exactly what H.B. 757, the  “religious refusal” bill, would do.  This bill, which includes language nearly identical to the Indiana law that drew national headlines last year, could allow a business owner or employee to refuse service, undermining local non-discrimination ordinances that protect lesbian, gay, bisexual, or transgender (LGBT) people. It could also permit hospitals to refuse to provide medically necessary care or allow a taxpayer-funded service provider to discriminate by denying a job because of the applicant's religion, sexual orientation, or gender identity.

A number of Georgia-based corporations and major employers in the state — such as SalesForce and the Metro Atlanta Chamber of Commerce — have already spoken out against this bill. In addition, the film industry in Georgia has staunchly opposed the passage of this type of legislation — stating emphatically that they would leave the state if this bill were to become law.

H.B. 757 does not promote a positive environment for citizens or businesses in Georgia. As a supporter of the Human Rights Campaign, America’s largest LGBT advocacy group, I urge you to veto H.B. 757.

When it comes to online activism, LGBT Georgians get it. HRC joined with Georgia Equality on March 2 to deliver 75,000 petitions to Deal expressing disgust with the anti-gay “religious freedom” legislation. And on March 19, HRC President Chad Griffin called on producers to halt productions in Georgia if the law they passed. They responded.

Something tipped the scales for Deal, who vetoed the legislation on Monday. “I do not think we have to discriminate against anyone to protect the faith-based community in Georgia,” Deal said.

Anti-gay conservatives are outraged at the veto. They are likely to be even more incensed after realizing they were beat in some small part thanks to Grindr. Because the best their side could do was a horrible reference to Hitler. 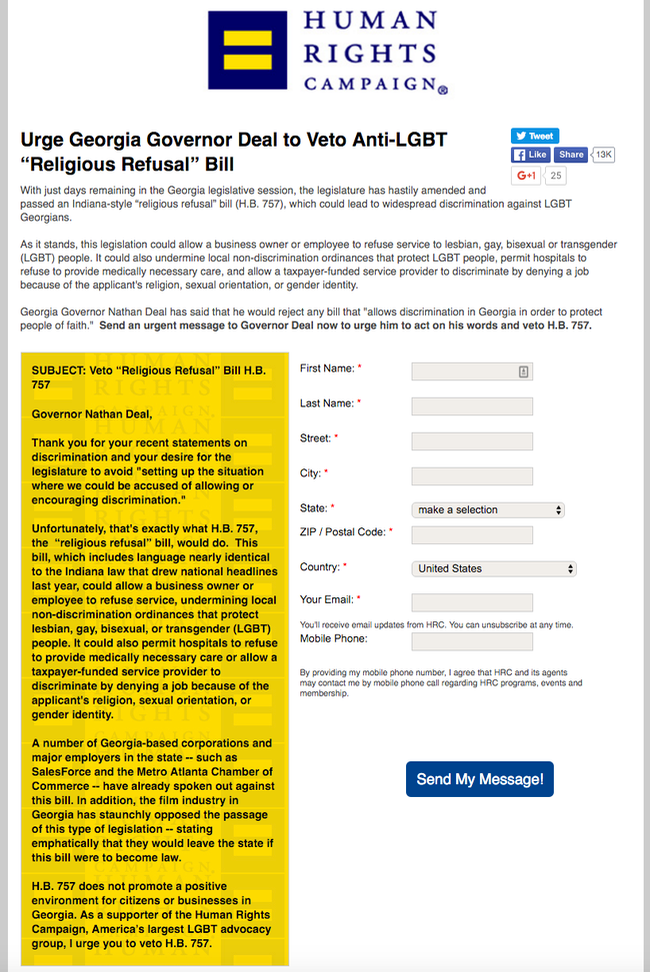