How gay is Atlanta? Sadly, not ‘Glee’-fully gay 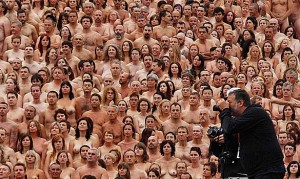 Atlanta might be the Gayest City in America by some accounts. But it’s not gay enough for “Glee” and you probably won’t see Spencer Tunick here anytime soon shooting his iconic group nudes.

Yes, it’s true. Atlantans enjoy living in a progressive city surrounded by onerous political and social conservatism, enough so that the gayest of all gay magazines, the Advocate, recently put this place at the top of their list of the 15 Gayest Cities in America. Call it weird science, but we still got the moniker.

For heaven’s sake, we’re so gay that Atlanta produced two — two! — of the 12 contestants on this season of Logo’s “RuPaul’s Drag Race.” (Never mind that they were both bounced by the fourth episode.)

But we’re apparently not gay enough for the gayest show on television, Fox’s “Glee.” The cast of the hit show — sans abilicious hottie Matthew Morrison — is hitting the road with a live stage show. The four-city effort in May spends two nights each in Los Angeles and New York City with a stop in between in Chicago. All pretty gay places.

The kicker, though, is the tour’s launch in Phoenix. As in Arizona and a place called Dodge Theatre. Really? That’s so not gay. The cast of a show like “Glee” belongs in the Gayest City in America in a place called the Fabulous Fox Theatre. Now that would amp up the gayness.

As if being ignored by “Glee” wasn’t enough of a hit to our pride, we’re also pretty certain that Atlanta isn’t gay enough for Spencer Tunick. That’s the photographer made famous for his nude group photos in public places. He was at in again on Monday on the steps of Sydney’s iconic Opera House (photo). Some 5,200 people took part in the very diverse crowd.

Tunick, who is known for his nude group photos in public spaces, posed participants for more than an hour in a variety of positions.

“It was difficult to get the straight participants to embrace the gay participants and vice versa,” Tunick said. “So I was very happy that that last set up finally got done and everyone came together (in a) united, friendly kiss, a loving kiss in front of this great structure.”

So there you go, Atlanta. Gay, but not “Glee”-fully gay.