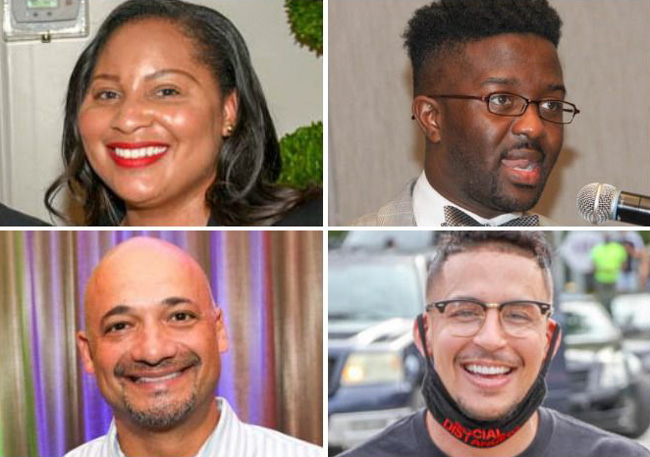 LGBTQ people of color are more likely than white LGBTQ people and the general population to have their work hours reduced, lose their jobs and ask for delays in paying bills due to the coronavirus pandemic, according to a new study.

The study findings, released by the Human Rights Campaign and the PSB Research Bureau in May, did not surprise local LGBTQ leaders of color. State Rep. Renitta Shannon (photo top left), a Democrat from Decatur, said it’s due to racial disparities in employment and health care.

“When you look at the fact that only one in five Black/Brown people on average have jobs that could transition to work from home, and that we are disproportionately represented in the uninsured population and overrepresented in the population of retail and minimum wage workers who have kept our grocery stores open, etc., it’s not hard to see how this would affect Black and Brown communities in disproportionately negative ways,” she told Project Q Atlanta.

“When white America gets a cold, Black and Brown America ends up in the ICU,” she added.

Further, 19 percent of LGBTQ people of color are more likely to have asked for delays in paying bills due to the pandemic, compared to 14 percent of white LGBTQ people and 12 percent of the general population.

“This does coincide with the data we are seeing with regards to the disparate impact of COVID-19 economic repercussions and the health impact on communities of color,” said Jerry Gonzalez (photo bottom left), executive director of the Georgia Association of Latino Elected Officials.

“Prioritizing these communities for support and outreach are essential to ensure equitable responses from government and philanthropy,” he added.

“The reality is when we talk about ‘Black Lives Matter,’ you have to also recognize that there is a demographic of some of the most vulnerable Black lives which are the LGBTQ community, especially the community in which we have a prominent number of young people specifically in this city that are living below the poverty line,” he said.

Policies must be enacted to close these economic and racial disparities, according to Shannon.

“This is what has to happen, otherwise we will just continue to be vulnerable to pandemics destroying lives,” she said.

“Clear, measurable objectives” must be created to address the disparities, according to HIV activist and THRIVE SS co-founder Daniel Driffin (photo top right).

“Until we really have equity built into the system, we will continue to not be shocked when these reports come out,” he added.

As if a pandemic wasn't disruptive enough in 2020, David Wilmott and Darnell Morgan added to the whirlwind by opening a restaurant and marrying...
Read more
10 Q Things

What's so great about leather? With Atlanta Leather Pride gearing up this weekend and the old adage try everything once, here's why we wouldn't knock it until you've tried it.
Read more
Coronavirus

Just like the rest of the world, Atlanta’s LGBTQ leagues, teams and fan groups are ready for a post-COVID spring and summer. Some are...
Read more