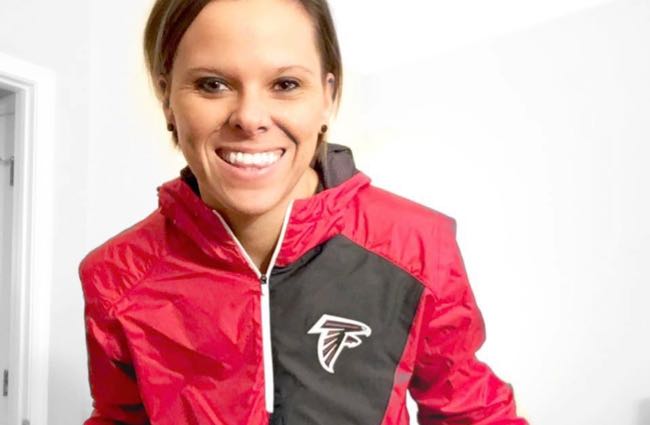 Atlanta Falcons owner Arthur Blank has long maintained it's time to make gay athletes 'part of our culture.' So it's no surprise that the Falcons played a big role in Katie Sowers becoming the first out LGBT coach in the NFL.

Sowers, a former professional football player, was hired earlier this month as a full-time assistant coach by the San Francisco 49ers. She became just the second female coach in the NFL – and its first openly LGBT one – while also marking another historic milestone. Sowers becomes the first openly gay coach in the history of major male American pro sports.

Sowers, 31, talked about her trailblazing role in an interview published Tuesday by Outsports.

“No matter what you do in life, one of the most important things is to be true to who you are,” Sowers, openly lesbian, told Outsports when asked why she is discussing her sexual orientation publicly for the first time. “There are so many people who identify as LGBT in the NFL, as in any business, that do not feel comfortable being public about their sexual orientation.

“The more we can create an environment that welcomes all types of people, no matter their race, gender, sexual orientation, religion, the more we can help ease the pain and burden that many carry every day.”

Sowers' road to full-time coach in the NFL came through Atlanta, where she worked as a scouting intern with the Falcons. Via Outsports:

In 2016, Sowers worked as a scouting intern with the Atlanta Falcons and came to know then-offensive coordinator Kyle Shanahan, now the 49ers head coach. Her relationship with Shanahan led her to do an internship this year with the 49ers as part of the Bill Walsh NFL Diversity Coaching Fellowship. Sowers so impressed Shanahan that he hired her as a full-time assistant for the 2017 season.

Shanahan praised Sowers and her work ethic, according to the Mercury News.

“We were in Atlanta, and people asked, ‘Why did you want to bring a girl here?’ I didn’t even look at it that why,” Shanahan told this newspaper earlier this month. “She helped us there and asked if she could do the same thing here.

“Because of what she did in Atlanta, we’d love her to be here,” Shanahan added. “She helps out. She’s good in the room. It helps her because she learns, too. But I like hearing Katie’s opinion. She does a good job for us.”

When Sowers got the 49ers job earlier this month, she announced the hiring in a Facebook post. In it, she thanked Falcons Assistant General Manager Scott Pioli for supporting her and “equal opportunity.”

“I was blessed to begin my journey in the NFL because of a close friend and mentor in Scott Pioli. Scott's passion for equal opportunity and his belief in a small town girl from Kansas, allowed me the opportunity to follow my passion. Scott continues to do amazing work, opening doors and breaking down walls in the NFL that for years have shut people out.

“I think we could all learn a little from people like Scott Pioli and find a way to open doors for those behind us. The most important words you can ever tell someone is ‘I believe in you.’ Scott, I know the best way that I can repay you is by continuing to open the door for others and I will do my best to continue what you have started and what you continue to do.”

Sowers is the second LGBT person in the NFL that Pioli has helped. Via Outsports:

Pioli has been instrumental in helping two gay people in the NFL who told their stories publicly this year. In addition to mentoring Sowers, he was also instrumental in former Patriots and Chiefs lineman Ryan O’Callaghan coming to terms with his sexual orientation.

Sowers said that, initially, she was nervous to come out to Pioli. Via Outsports:

Buzinski: Do the 49ers know and did the Falcons know about your orientation?

Sowers: My orientation first came up with Scott Pioli who is the assistant GM for the Atlanta falcons prior to my internship. At first, I was nervous to tell him as many are in new environments, but it came up in an everyday conversation about my family and life back home in Kansas City.

I could not have asked for a more open minded and accepting group of people to work with. I never once felt judged and I was treated just like anyone would want to be treated: as a typical person working to build a career.

Blank – pictured with Sowers below in a February photo – has been outspoken in his support of LGBT athletes, even when a Falcons player or coach strays off message. In 2014, as the team expressed interest in out NFL prospect Michael Sam, Blank was clear that there is a place for gay athletes on his roster.

“I think the most important thing is that it is a matter of respect,” Blank told USA TODAY Sports. “How we live is more important that what we say about it. The guidance that we're getting from the league is outstanding, and the attention that it is getting is outstanding. But is up to us to make sure it becomes a living part of our culture, with more sensitivity, more awareness of the impact of what we're saying.”

That same year, the NFL kicked off its LGBT diversity effort with the Falcons.

Last year, the Falcons signed onto Georgia Prospers, a coalition of 450 businesses that promotes workplace quality and opposes anti-gay “religious freedom” legislation under consideration by Georgia lawmakers. Blank also spoke out strongly against House Bill 757, an omnibus hate measure that sparked a national controversy and was later vetoed by Gov. Nathan Deal.

“One of my bedrock values is 'Include Everyone' and it's a principle we embrace and strive to live each and every day with my family and our associates, a vast majority of which live and work in Georgia. I strongly believe a diverse, inclusive and welcoming Georgia is critical to our citizens and the millions of visitors coming to enjoy all that our great state has to offer. House Bill 757 undermines these principles and would have long-lasting negative impact on our state and the people of Georgia,” Blank said in March 2016.

There will come a time when you think everything is finished. That will be the beginning. #influence #sundaymood