How allies can really show their LGBTQ solidarity 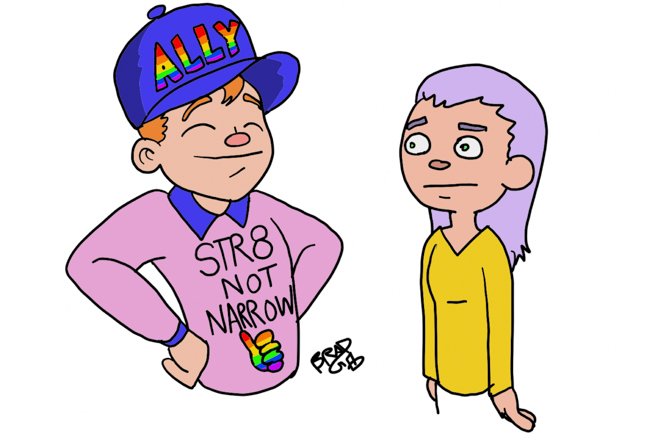 If it's not one thing, it's another. If you aren't allied and loving your queers your way, you're a queer hating your body knowing when size really, really matters. Confused? Let our advice column The Q sort it out.

I’m straight and never narrow. My circle of friends has always included queer people, but I have a question regarding how to indicate to people that I am an ally.

The other day when talking about holiday plans, a new colleague mentioned her girlfriend's family as her “in-laws.” I asked, “Oh, are you married?” She said “no,” and after a silence, we left it at that.

I know I am and have been “an LGBTQ friend” since time began, but I don't know that I communicated that to her effectively.

What do I say to someone to let them know I am an ally without making a big deal of it?

For longtime allies with no agenda and a lifelong history of inclusion, it comes down to your instinct in the situation, as well as your relationship with the person.

For the first time broaching the subject, it sounds like you showed genuine interest in another human. Great start, and amazing that some straight folks might not get that simple step.

My bet is that she’s not thinking about it one way or another over this simple interaction. When the opportunity arises naturally in conversation the next time, you'll know when to take the opportunity to support/back them up/reaffirm their queerness.

If you’re looking to act on it more quickly, being an ally can also just be asking after the girlfriend the next time you think about it, without making a big deal: “How's the girlfriend doing?!” “What are y’all doing this weekend?”

My equipment is way too big. Before you start chastising me about a problem other gay guys wish they had, it really, really is really, really big. It gets the wrong kind of attention, and that in turn has driven away many quality guys.

I’ve considered drastic measures, even surgery, but nothing seems viable. All I know is I hate my dick. What would you recommend?

You didn’t indicate what we’re working with here – beer can, eggplant or medical anomaly? Since you mention some people do like your penis the way it is, it’s probably not physically impossible to manage for everybody.

In most cases, big is in the booty of the beholder.

First and foremost, stop hating your dick. It’s part of you. Devoting such negative energy toward yourself can be as dangerous as an elective surgery to your penis, which by the way, is incredibly dangerous and won’t work.

I do get your drift, though. It’s hard to hear that you’re not packing the equipment to do the job someone wants done – for any reason. If he’s willing, by all means continue to try with your boyfriend. If he’s not, have fun with literally every other sexual option under the sun. Also if he’s agreeable, and you can’t live without penetration, consider adding a third to your sexploits.

Only you can answer if this is a relationship deal-breaker or not, but don’t give up a worthwhile relationship without a fight.

The Q is for entertainment purposes and not professional counseling. Send your burning Qs to [email protected].

This column originally appeared in Q magazine. Read the latest issue, enjoy all of the past editions of The Q advice column, and look for a new issue of Q magazine each week online and around town.