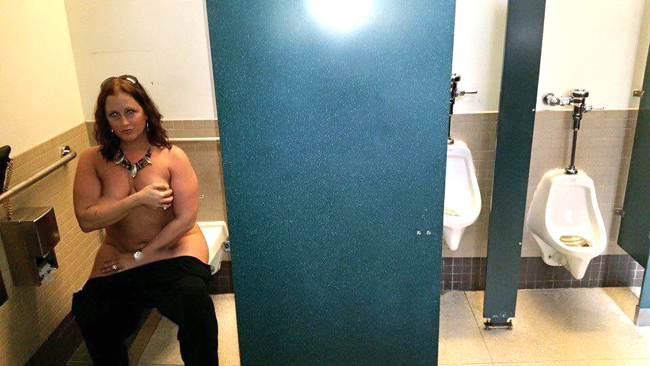 A transgender woman posed mostly nude in a men's restroom at the Texas Capitol on Wednesday to protest four bills in the legislature that would bar people from using restrooms according to how they identify.

Nikki Araguz Loyd, who posed on a toilet in a men's room outside the House chamber, was among 25 trans activists from Houston who descended on the Capitol to lobby against the bills. Araguz Loyd is best known as for a high-profile lawsuit in which she's seeking death benefits from her late husband, a firefighter who died in the line of duty. Her husband's family is seeking to deny her the benefits, arguing their marriage is void because she was born male, and the case is now pending before the Texas Supreme Court.

Araguz Loyd's photo in the men's room was part of the #WeJustNeedToPee campaign, designed to highlight the stupidity of bills in Florida, Minnesota and Texas that would force trans people to use restrooms according to their birth sex.

“In 1988, as a 13-year-old transgender child, I presented as a female but was required to use the male public restroom, and in doing so I was raped and infected with HIV,” Araguz said. “These bills are dangerous; the bathroom can be dangerous for trans people, especially when we have a target on our back with a monetary reward. I was raped by a heterosexual male. Transgender people are not predators, and these bills make us the prey. I have not entered into a male restroom in over 25 years. I am nervous but desperate to end such oppressive and dangerous legislation.”

Bills from Rep. Gilbert Pena, a Republican from Pasadena, would make schools and businesses liable for damages if they allow trans people to use restrooms and similar facilities according to how they identify, effectively placing a bounty on the heads of violators. And proposals from Rep. Debbie Riddle, a Republican from Tomball, would make it a crime for trans people to use restrooms according to how they identify, and for business owners to allow them to do so.

Wednesday's impromptu lobby day was organized by Texas Wins, a new statewide coalition dedicated to protecting LGBT people from discrimination. The four transgender bathroom bills are among more than 20 anti-LGBT measures introduced in this year's Legislature – likely the most in the history of any state.

While Araguz took her opposition to the restroom, other activists visited lawmakers' offices for face-to-face meetings with staff members.

“We thought we were past the days of Jim Crow and criminalizing bathrooms,” said Monica Roberts, a prominent black transgender blogger who participated in the lobby day.

“We wanted elected officials to see youth that this would effect,” Weaver said. “We met only with staffers, but I think the personalizing of the effects of these very dangerous bills had enormous impact.”

Riddle has declined to comment on her bills. Last week, Pena told the Texas Observer:

“This bill really is trying to establish the students’ rights to privacy. How many girls in our high schools are going to be willing to allow some transgender male into their bathroom? Would you allow that for your daughter? I would not allow it for my daughter.” 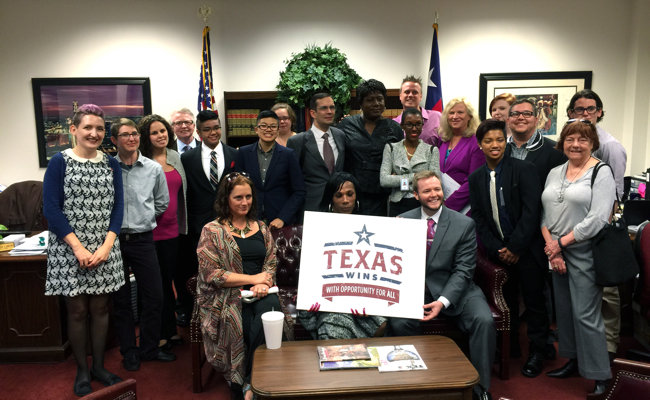