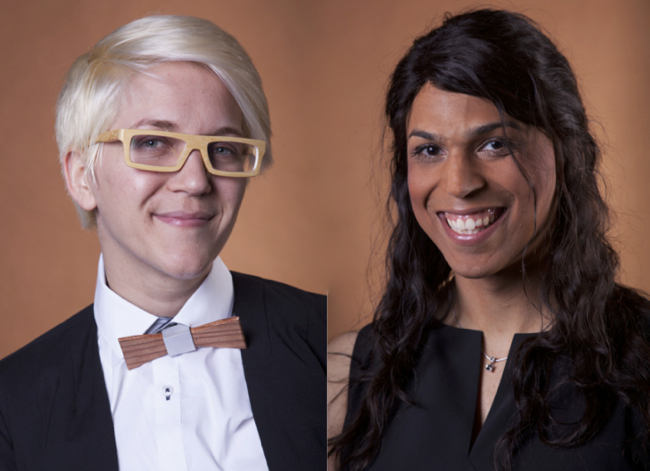 Two women with born-and-bred Greater Houston roots are among the lucky 2014 recipients of the coveted educational scholarships doled out by big-gay-money LGBT benefactor the Point Foundation.

The foundation chooses its scholars carefully each year and puts funds in the higher education coffers of students with widely varying interests, backgrounds and education levels. What do they have in common? A record of excellence and a gay card – that is, they are LGBT.

Brittney Balkcom (photo, left) is a violin virtuoso hailing from Humble and seeking her doctorate from University of Southern California. Audrey Stewart (right) is an Army vet originally from Houston seeking a Masters from Columbia Business School. They each harbor goals in queer activism and awareness.

Here are their bios from the full list of Point Scholarship recipients.

Audrey Stewart is a seven-year Army veteran who has served multiple tours overseas, rising through the ranks to Captain. She has earned a BS in French from the United States Military Academy and an MA in Leadership from the University of Texas at El Paso. After attending Columbia Business School, she plans to develop operational and financial experience in the private sector before returning to public service and help give back to her communities.

Born in Houston, Texas, Audrey became aware of what it means to be marginalized from a young age. As a child, she grew up in a multi-racial family and was often the only minority child in her classes and extracurricular activities. At the United States Military Academy, she studied under the smothering effects of the military’s “Don’t Ask Don’t Tell” policy and saw first-hand the effects it had on her classmates. Today, as an [LGBT] woman of color, she is acutely aware of the intersectional marginalization felt every day by so many of her sisters and other members of the LGBTQ community.

Brittney Balkcom was born and raised in the small, conservative, predominantly low-income town of Humble, Texas. She is continually inspired by the ways in which music can be healing and transformative for individuals and communities in the face of adversity, and it is this belief that fuels her passion for making music.

Brittney earned a Bachelor of Arts degree from the University of North Texas, and a Master of Music degree from the Longy School of Music of Bard College. Her Master’s thesis, “The Creative Response to Homophobic America: Gay American Composers of the 20th Century,” examines how music changed an oppressed community, and how that community changed music.

In 2013, Brittney debuted at Carnegie Hall-Weill Recital Hall, as a first prize winner of the Alexander & Buono International Flute Competition. She also won first prize in the 2013 Myrna W. Brown Artist Competition, and in that same year, she was named a Miyazawa Emerging Artist. Brittney has appeared as a soloist and guest artist at various colleges and festivals, and she has performed and recorded with many Boston-based ensembles. Her 2014 engagements include a three-concert series at Makeshift Boston entitled Inherently Queer; performances at the Peabody Essex Museum with rising Metropolitan Opera star Anthony Roth Constanzo as a member of the Encounters Ensemble, and the Square Enix release of the soundtrack to Final Fantasy XIII: Lightning Returns, on which she can be heard as the solo flutist.

As a doctoral candidate at the University of Southern California, she plans to continue pursuing opportunities which combine her passions for performance, research, and LGBTQ activism.