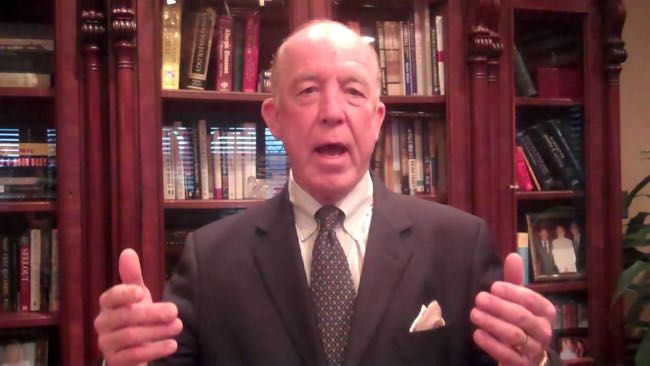 Late last month, Hotze hosted an anti-LGBT hatefest in Houston – what he calls a dinner party – to allow Jared Woodfill to formally announce his campaign to lead the state GOP, which he tried and failed to do last year. Woodfill also championed the anti-HERO fight with misleading, transphobic rhetoric to fear monger his way to victory. It worked.

At the dinner party, Hotze became so unglued over LGBT issues that it made even the friendly crowd uncomfortable. Via the Quorum Report:

Hotze called his political opposition “foul” and said he received many death threats during his campaign against HERO. “If they have it their way…they will put you in jail and they will fine you,” Hotze said.

“Pedophilia is the next point. They’re going to come down and change that law,” Hotze said, adding that gay rights activists “want to pervert this society.” Even in a very conservative room, that comment drew what could charitably be described as tepid applause.

A few days before that, Hotze joined Woodfill in a Pasadena church for a “Take Back Our Party” rally to lament the lack of “a militant, warrior mentality” among Christians. Via New Civil Rights Movement:

“I think what we’re missing in the Christian church today is a militant, warrior mentality,” Hotze told the crowd. “I know Jesus said not to take up arms, but I take the Old Testament literally. … They want to force us to celebrate homosexuality and other perverted acts — that’s all they think about. What has our society come to when Bruce Jenner puts on a dress and goes on the ESPN and gets an award for courage?”

Hotze then outdid himself. Via the Houston Press:

“They want to force us to celebrate homosexuality and other perverted acts — that’s all they think about,” Hotze said. “What has our society come to when Bruce Jenner puts on a dress and goes on the ESPN and gets an award for courage?” Hotze deepened his voice an octave or two and gave a brief impression of Jenner: “uh, I’m Caitlyn Jenner, uh, yeah.”

“Thirty years ago, they would have locked Jenner up,” Hotze continued. “These people are crazy as a bedbug. This is a wicked, evil, satanic movement. They want to recruit, brainwash our children, right when the hormones start kicking in. I know, I’m a doctor. We’ve got sick, sexually perverted presidents. Then we’ve got the Muslim problem, which is one thing I like about Dan, uh, Dan, uh, Dan, uh, Donald Trump. If you know about that religion, then you know they want you to do what they want you to do or they’ll cut your head off! We need people to stand up against this absurd, ungodly tomfoolery. We’re putting on a full-court press. We’re challenging 35 seats to say enough is enough. We’re going to do everything we can to take them down.”

Hotze just keeps trolling gay Houston hoping that someone will listen. And yet we're the crazy ones?